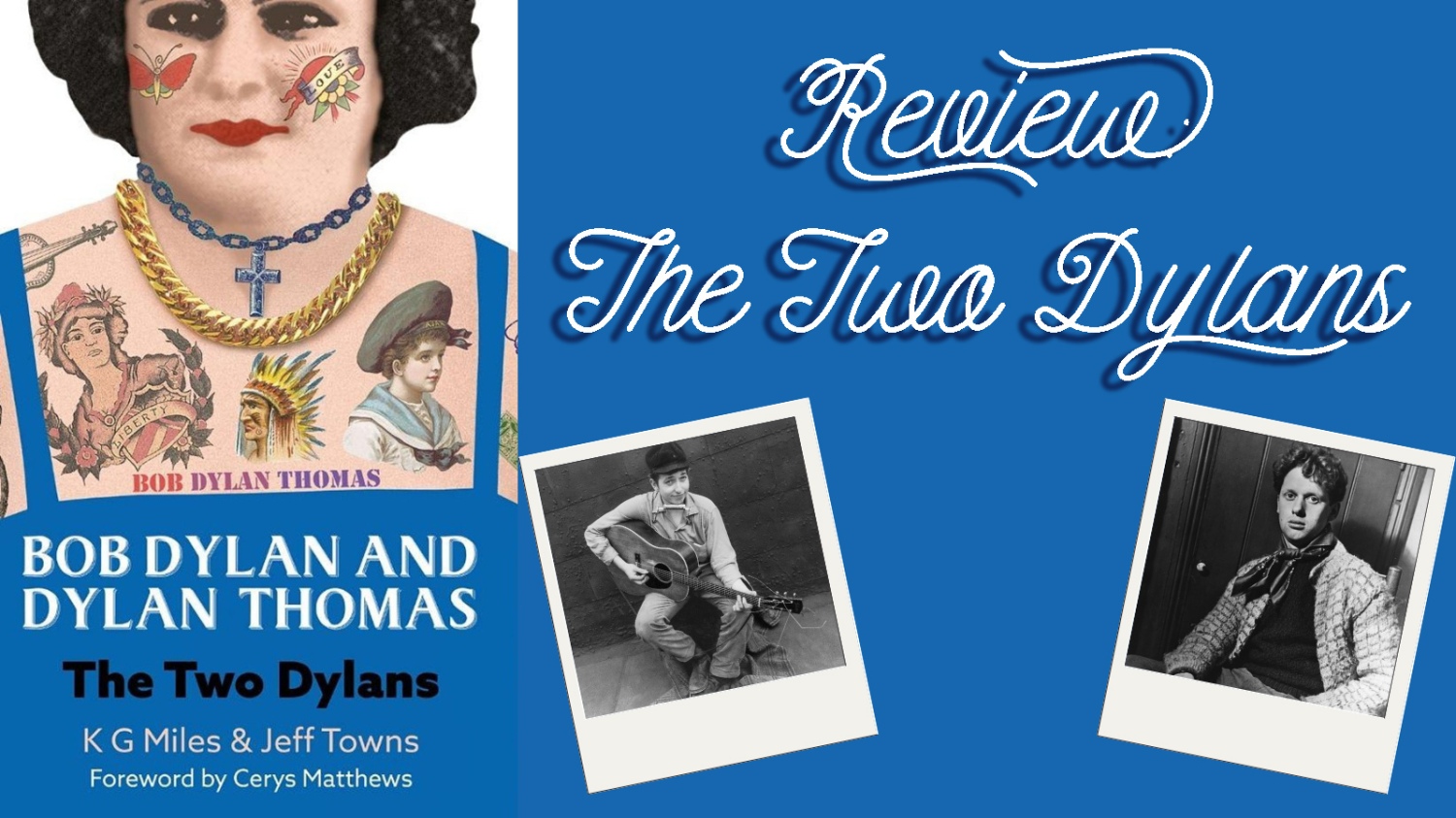 NB/Disclosure: I got a review copy of the book in exchange for an honest review

When you think of the name Dylan, the first person that comes to mind is Bob Dylan. But who was his inspiration? Where did his name come from? None other than Dylan Thomas. It’s about time there’s a book that talks about the connections between the two. The book is a collaboration between two Dylan fans, one a leading Bob Dylan expert – KG Miles, who wrote Bob Dylan in London: Troubadour Tales with Jackie Lees and Bob Dylan in the Big Apple: Troubadour Tales of New York and is the curator of the Dylan room at London’s famous Troubadour Club, and Jeff Towns – a leading Dylan Thomas expert and founder of Dylans bookstore in Swansea, Wales (the birthplace of greats like Dylan Thomas and Pete Ham) also known as “The Dylan Thomas Guy”. Both have decades of experience in their field of research and together they wrote a book about the two Dylans. KG Miles wrote all the sections on Bob Dylan and Jeff Towns wrote all the sections on Dylan Thomas.

If you read Bob Dylan in the Big Apple, you may recall the White Horse Tavern being mentioned, and in that book, you’ll read that when Bob Dylan was in Greenwich Village, he followed in the footsteps of one of his idols, Dylan Thomas, and went to The White Horse Tavern, where Dylan Thomas drank before his death on 9 November 1953 – Bob Dylan was a 12 year old in Hibbing, Minnesota at that time. There’s more connections where that came from and if you want to read about that, then this is the book for you!

The book contains 21 chapters all about different connections, influences, and people who were influenced by the two Dylans. Logically, it begins with some background information about the name Dylan and Dylan Thomas’ birthplace of Wales. Together the two of them popularised the name Dylan, which was taken from a character in the Mabinogi called Dylan ail Don, an ancient book of mythic Welsh folk tales – the name Rhiannon, as immortalised in the Fleetwood Mac song which Stevie Nicks introduces as “a song about an old Welsh witch”, comes from a character in the Mabinogi too! What does Dylan mean? It means “son of the sea”. Dylan Thomas’ father, David John Thomas was a fluent Welsh speaker and proud of his heritage and wanted to give his son a very Welsh name and so he looked to one of his interests, literature, and Bob’s your uncle. Interestingly enough, Dylan Thomas’s father did not want him to speak Welsh or even sound Welsh for that matter, because the Welsh language was seen as a low class language. Dylan Thomas kept the tradition going and gave two of his three children very Welsh names: Llewelyn and Aeronwy. The other child had an Irish name, Colm. Now, the proper pronunciation of Dylan is not dill-in, but dull-an, but because Anglophones often butcher the Welsh language, the mispronunciation of Dylan as we know it stuck. Kinda like how Billie Eilish pronounces her name as eye-lish, when in Irish it’s pronounced ay-lish. Fun fact: Swansea-born British Invasion star Spencer Davis dropped the e from his surname because as common as it is (only the second most common surname in Wales), people kept pronouncing it like “Davees”.

Dylan Thomas was more than just a writer, he also read his writings on the radio and would do reading tours and in a way was a rock star of a poet, with him having mainstream popularity and his frequent appearances on the BBC making him an accessible writer. Even more than that, he was accessible because he was averse to academic analysis of his work. Like a rock star, he also had a drinking problem and died young, not even making it to 40. Similar to Bob Dylan, he was well-loved, but there were definitely factions that didn’t like him and thought there was nothing Welsh about him because his poetry was in English – you could blame colonialism for that. Similarly, folk purists weren’t happy with Dylan going electric, but thanks to his competing with The Beatles, he went back to his folk roots with John Wesley Harding as a response to Sgt Pepper.

One of the highlights of the book is stories of the two Dylans meeting other famous people: Dylan Thomas and Charlie Chaplin, both Dylans meeting Allen Ginsberg, Dylan Thomas and Idris Davies – who wrote Gwalia Deserta which became immortalised as “The Bells of Rhymney” (The Byrds, who frequently covered Bob Dylan songs, would famously cover this song on the album Mr Tambourine Man – which takes its title from a famous Bob Dylan song), Bob Dylan and Woody Guthrie (who he visited in hospital shortly after arriving in New York), Bob Dylan and Pete Seeger, both Dylans and Henry Miller, and more! What a small world and a great read for /r/BarbaraWalters4Scale readers. Also, blows my mind how many famous people stayed at the Chelsea Hotel. The Chelsea Hotel was a meeting place for people, but Bob Dylan is a person all sorts of people are influenced by – music is a meeting place because of how it brings people together.

In this book, you’ll get an education on so many things Welsh culture, beat poetry, film history, folk music history, Greenwich Village history, and how all these things connect together – everything in life seems to be so connected. Like Bob Dylan, there’s a variety of things because he took inspiration from everywhere. I remember hearing him described as being a sponge, and that’s the perfect description of him. Jeff Towns has a lot of cool stories to tell about being a book shop owner and I loved reading those parts of the book. This book is a great companion to Troubadour Tales and Bob Dylan in the Big Apple.

You don’t have to know a lot about Dylan Thomas or poetry to read this book and it’s a good introduction to one of the great. A great example of how classic rock opens doors and builds bridges, inspiring people to expand their horizons and learn about all sorts of things. Need to make something interesting, relate it to classic rock! That’s my favourite approach!