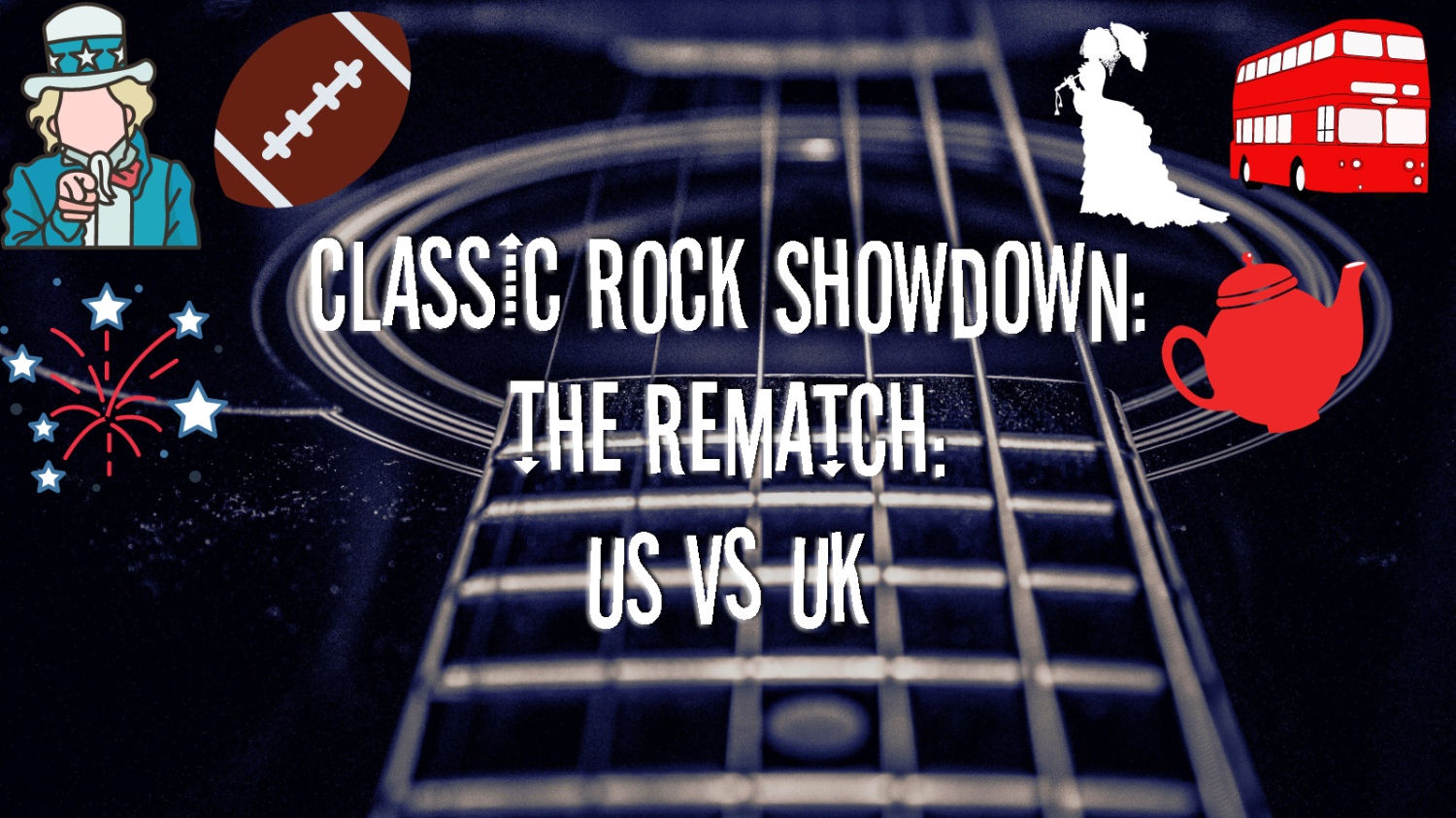 A year ago, I did a fan participation post that was a this or that poll between something in classic rock that’s British versus American. The Brits won that one, but this year that might change. It’s time for a rematch and this time I decided to do covers versus originals, since that’s always a fun one and I got some great feedback on this idea.

You know I couldn’t just pick 20 songs and since it’s 2022, we’re doing 22 songs, now this means there could be a tie, and I’ll break out the tiebreaker song if there is a tie. Eleven songs will be songs originally by American musicians and 11 will be originally by British musicians. I wanted to represent a good chunk of classic rock history so I included some songs as early as the late 50s and some songs as late as the mid 70s, most of the songs are concentrated around the 60s, which is my favourite decade hands down!

I ran the poll on my Instagram stories, so my readers only had a day to vote and choose who did the better version of each song, but I’m always happy to hear my readers’ opinions so if you want to share your opinions and play along, I’ll have the playlist embedded below and you can play along! 🙂

And for a little bonus, I made two companion playlists with even more covers:

One is Americans covering British Invasion and other British musicians:

And the other is British musicians covering American musicians:

Well we’re going to start with my opinions and this will be polarising so I’m ready for the hate comments telling me I have no taste!

The Who are the winners here. I have to pick The Who’s Live At Leeds Version. That’s the best live album of all time. I’m also partial to hard rock and jams in songs. And there’s some nice touches like John Entwistle’s growling vocals and of course Keith Moon’s drumming. I love Eddie Cochran’s original by the way, so no hate here!

Ultimately Bobby Freeman wins. This is a tough one. I like both. I first heard Cliff Richard’s version (weird considering I’m American and Americans, especially my age, usually don’t know who Cliff Richard is). I love the piano intro.

Tough one, but I pick Dion. This is definitely one of the toughest because both did a fantastic job. Both are legends and still alive as I’m writing this post, among the last survivors of that generation of musicians. I like the backing vocals in Dion’s version, plus I know this version better. That said, Marty’s version is great too.

4. Apache: The Shadows versus The Ventures (Shadows popularised it although Bert Weedon did it first, 1960)

Easily The Shadows. Americans don’t know a lot about pre-British Invasion British rock and roll, but this is a song that should sound familiar to anyone who knows their music history, as this song was famously sampled by the Sugarhill Gang, by way of the Incredible Bongo Band. The Ventures had a great guitar sound, and I love Nokie Edwards’ use of the fuzz guitar, but no one can play Hank Marvin like Hank Marvin. Also blows my mind that Hank Marvin was only 18 when that song was recorded! The band were all quite young. Bruce Welch was 18, Jet Harris was 21, and Tony Meehan was only 17! The Shadows may have popularised it, but Bert Weedon originally recorded the song around the same time and released his version first. It’s definitely worth listening to.

Moody Blues’ version wins here. I was lucky to see Denny Laine live years ago and heard him perform this song. Great early Moody Blues song. Bessie Banks’ original is also really good and I’ve actually not heard this one before putting together this list.

Sam Cooke wins. As much as I love Steve Marriott’s voice and I think the Small Faces definitely did Sam Cooke proud, it’s hard to beat the original. I wish Sam Cooke had been alive to know how much we love this song and it makes me wonder what Sam Cooke could have done in the mid-late 60s. A genius gone too soon.

Manfreds win. I definitely have a lot more of an appreciation for Bob Dylan now than when I first got into classic rock and I like hearing his versions, but often I end up preferring covers like when The Byrds or Manfred Mann do his songs. I love Paul Jones’ voice!

Beatles win, duh. I had to put a Beatles song in here and Vanilla Fudge do a great cover of Ticket to Ride and I love that extended jam sort of approach that they do. Kinda unfair and tough competition. Vanilla Fudge did a fantastic job, but it’s pretty impossible to beat The Beatles.

Bay City Rollers win. I like Frankie Valli, don’t get me wrong. I think this song suited the Bay City Rollers poppy style better and I’ve heard that version way more. I can definitely picture more screaming fangirls with the Rollers version than with Frankie Valli’s version.

10. I’m Not Like Everybody Else: The Kinks versus The Chocolate Watchband (Kinks original, 1966)

Kinks win, but it was a tough pick. The Chocolate Watchband did one of the best Kinks covers I’ve ever heard – tough competition here, both amazing with a lot of angst in the vocals. David Aguilar’s voice reminds me a lot of Mick Jagger’s and I think it suits the song well since the Stones and Animals have a similar vibe. Ray wanted Eric Burdon to sing it, but since the Animals turned it down, The Kinks recorded it and it became a hardcore fan favourite with Dave on lead vocals, I love his unique screaming style voice. And there’s something about sibling groups and the voices of the siblings working so well together.

11. Inside Looking Out: Animals versus Grand Funk (Animals original, 1966)

Grand Funk win. Personally, one of the great examples of a cover that’s way better than the original.

The song has American roots, as it’s based on a prison chant called “Rosie”. The Animals wrote some new lyrics and arranged it in an R&B/rock style. I love The Animals and Eric Burdon has a great voice and I think he did a great job in this song, but Grand Funk really took this song to the next level with that jam. I love all things British Invasion and I’m a huge fan of hard rock and I have so much appreciation for the power trio and Grand Funk’s artistry and mastery of instruments. The bass and drums in that song, enough said!

Joan Baez wins. I love the Rolling Stones, but I like Joan’s voice better than Keith Richards’.

Santana win! I grew up listening to Santana. This was a tough one! I love Peter Green era Fleetwood Mac, but this is one of those examples where the cover wins. Santana really took this one to the next level and I love how it was a medley with Gábor Szabó’s “Gypsy Queen”, you have to listen to the whole thing. Both versions are fabulous though!

Tina Turner wins! I adore The Who, but some versions of songs from Tommy were better in the movie, namely Elton John’s version of “Pinball Wizard” and Tina Turner’s version of “The Acid Queen”. They both stole the show like The Who did to The Rolling Stones in Rock and Roll Circus. Even if we take out the visuals, no contest, Tina Turner’s voice is better than Pete Townshend’s.

Fanny win! I love Cream, but I like Fanny’s version better. Something about women singing rock and roll songs, I love it! Fanny are incredible and if you don’t listen to them already, you should listen to them!

20. Without You: Badfinger versus Harry Nilsson (Badfinger original, 1970)

Badfinger win! Gonna be a controversial one because Harry Nilsson’s version is the better known one but I love Badfinger and I think this sad song is best listened to when you hear it from the songwriters: Pete Ham and Tom Evans. Absolute geniuses who deserved so much better.

Heart win! Kiki Dee’s original is great, but I prefer Ann Wilson’s voice. Both are really good versions. If you want another great version, Thelma Houston did a great cover too!

It was a tie between the US and UK! 11-11. But did I prefer the covers or the originals? I picked 12 covers and 10 originals, so covers won in my case. I guess I really can appreciate a good cover!

Readers have their say:

Now it’s the readers’ turn! What do they think? For simplicity’s sake I only held polls on Instagram.

1. Summertime Blues: Eddie Cochran versus The Who

2. Do You Wanna Dance?: Bobby Freeman versus Cliff Richard

Winner: Bobby Freeman with 71% of the vote – Original

3. A Teenager in Love: Dion versus Marty Wilde

Winner: Dion with 62% of the vote – Original

4. Apache: The Shadows versus The Ventures

Winner: The Shadows with 68% of the vote – Original

Winner: Moody Blues with 64% of the vote – Cover

Winner: Sam Cooke with 65% of the vote – Original

Winner: Bob Dylan with 53% of the vote – Original

Winner: The Beatles with 82% of the vote – Original

Winner: Bay City Rollers with 69% of the vote – Cover

10. I’m Not Like Everybody Else: The Kinks versus The Chocolate Watchband

Winner: The Kinks with 78% of the vote – Original

11. Inside Looking Out: Animals versus Grand Funk

Winner: Animals with 56% of the vote – Original

Winner: Deep Purple with 93% of the vote – Cover

13. Gone – Moving On: Paul Revere and the Raiders versus The Factory

Winner: The Factory with 73% of the vote – Cover

14. Bend Me, Shape Me: American Breed versus Amen Corner

Winner: American Breed with 73% of the vote – Original

Winner: Spencer Davis Group with 70% of the vote – Original

16. Salt of the Earth: The Rolling Stones versus Joan Baez

Winner: Santana with 89% of the vote – Cover

18. The Acid Queen: The Who versus Tina Turner

Winner: Tina Turner with 54% of the vote – Cover

Winner: Cream with 82% of the vote – Original

20. Without You: Badfinger versus Harry Nilsson

Winner: Harry Nilsson with 69% of the vote – Cover

Winner: Velvet Underground with 83% of the vote – Original

22. I’ve Got The Music In Me: Kiki Dee versus Heart

Winner: Kiki Dee with 56% of the vote – Original

UK win 12 to 10! A very close one! My readers tended to prefer the originals with 13 originals winning versus 9 covers winning.

So what do you think? Share your thoughts in the comments section below! 🙂