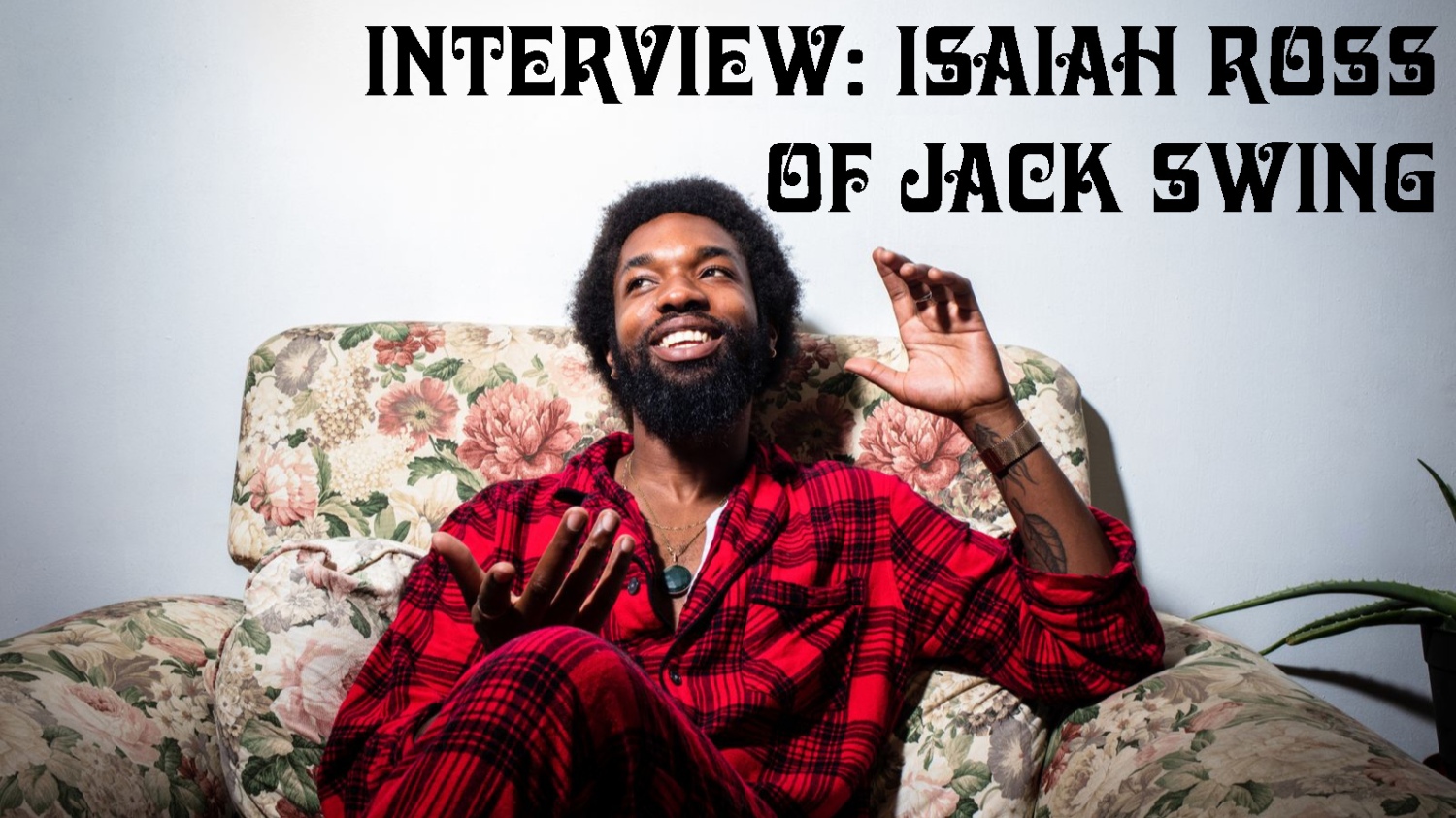 Jack Swing are a rock band from Pittsburgh formed in 2016 by Isaiah Ross. The band are prolific and hard working, releasing new music, touring, and gigging often. Even in a pandemic, the band powered through and released an EP in September, Get What’s Mine For You. They’re accomplished, receiving extensive radio play, positive reviews, a premiere from Afropunk, and being a regular band at festivals in Pittsburgh. Big Takeover Magazine called them “the physical embodiment of rock ‘n roll in 2020”. They’re not stopping either! They’re working on their debut album and it’s something I definitely look forward to hearing because I really love the work they’ve released so far. My favourites are “Get What’s Mine For You”, “Whether I Do”, “Take The Night”, and “Hazy Days”.

We are lucky to have Isaiah from Jack Swing with us on the blog for an interview. If you want to learn more about him and his music, keep on reading!

Angie Moon: How would you describe your music to a new listener?

Isaiah Ross: We’ve been told that our music is a bit all over the place, but at the end of the day I would describe us as a rock band that touches upon a lot of other genres as well. Soul, funk, and blues are some of the larger ones that standout. We try to not limit our sound to but rather start from the rock band perspective that we’re comfortable with and add on to it from there. But a blanket term you can put over all of our music is; fired up.

Angie: How did you get into classic rock?

Isaiah: Classic rock was not something I heard in the house growing up. I have a vivid memory of being shown the song Are You Gonna Be My Girl by Jet when I was 7 or 8 years old on the school playground which is one my earliest memories of rock music in general (though I’m not sure how much Jet would fall into the classic rock category.) Regardless, hearing that song both blew my mind and piqued my interest.

Comically enough another huge moment for me was seeing School of Rock around the same time. I remember that movie really solidifying rock music as something that was going to be a serious part of my life. As I grew older and began learning music I remember this moment while listening to Led Zeppelin I where I was just completely blown away, it might as well have melted my brain and it put it back together again. That was the point where I realised both that there was something to classic rock (and Led Zeppelin specifically of course) that was in a league of its own and that this special energy was something I needed to capture in my music.

Angie: How do you think your sound has evolved and changed since the band started in 2016?

Isaiah: Our sound has been evolving nonstop since 2016. With the first EP, Cloud Cover I wrote and played everything except drums so it was pretty much through solely my point of view. With both Supermoon and Get What’s Mine For You we had years of collaborating together on material. The more time that we’ve spent playing together, the more we understand both each other and  what we’re going for as a band. In addition to this, with each release I believe us to be a bit more uninhibited, a bit less concerned with what genre we are striving for but more focusing on making the best new music that we can, with no rules past that.

Angie: How has the new EP, Get What’s Mine For You, been received so far?

Isaiah: The EP has been received very well though there’s always more work to do. Definitely by far the best a release of ours has done to date. We actually gained a good bit of followers due to someone posting it to a big Reddit thread, which was something I knew very little about until this point. We’re hoping to keep this up as we prepare to record our debut full length.
Angie: What inspires your songwriting?
Isaiah: All kinds of experiences. Both the beautiful and evil parts of this world, Sometimes you see something beautiful and it makes you feel a special thing. When struck by these feelings I try to recreate and preserve them with music. I try to apply this to all emotions, something makes me feel inspired or terribly depressed and I attempt to figure out what that feeling sounds like and base the creation of the song around that.
Angie: What are your live shows like?
Isaiah: Our live shows are very pumped up. We have a very special energy when playing live together, which is something we specifically tried to capture with this release. We’ve been jamming together for so long that we really know what it feels like to be in the groove with one another, so live we try to bring that groove with as much energy as possible. But lots of yelling, and sometimes backflips.
Angie: What is the music scene like in Pittsburgh?
Isaiah: The music scene in Pittsburgh is growing in a truly beautiful way. When I was younger playing in the area, you would see a lot of the exact same sort of bands. This was during the emo revival period if you will so there was a whole lot of that. In recent years it has truly diversified itself into something special. Now, there are tons of Pittsburgh artists from every genre who I would recommend. Though you see a lot of great artists come from Pittsburgh, it still is not necessarily a music city, so it’s hard to sustain a career solely from your music. In the coming years, with the sheer amount of incredible music coming from this city, I hope that it finds a way to actually be sustainable for artists.
Angie: What is something interesting about the band that might surprise listeners?
Isaiah: Years ago we had a secret rap group featuring the members of the band. I unfortunately cannot say anymore, but it’s safe to say our days of rapping aren’t completely behind us.
Angie: If you could collaborate with any musician, who would you collaborate with?
Isaiah: That’s very tough. This may be a cop-out but I’m going to choose two. First I’d say Stevie Wonder. This man has a musical understanding of emotion like no other and has one of the strongest discographies of all time. I can’t imagine the things I would learn from sharing any amount of time and space with this incredible human being.
Secondly, and stick with me here, Kanye West. Kanye is one of those artists who is just so deeply ingrained in modern music. Definitely can say what you will, but what he’s created and influenced cannot be disputed. I also have a hunch that it would make for the most exciting day of my life.
Angie: What is your proudest accomplishment as a band?
Isaiah: I’m very proud of this most recent release. With this we were preparing for some serious lineup changes and wanted to capture the special energy that we had created together over the years. While I personally feel that we succeeded in this regard, it feels nice for the EP to be received so well with that having been the intention.
As far as a single concrete accomplishment I’m very proud of the music video for “Get What’s Mine For You” doing as well as it has. In so many instances so much work and so many hands go into something like this and it doesn’t get the attention it warrants. It feels great to work on something like this with a team of people that you really love and respect and for it to actually gain some traction.
Angie: What kept you motivated during this crazy year?
Isaiah: Music mainly. The band lives together so when it came time to quarantine we decided to focus on writing and working on aspects of the music other than live shows. Definitely beginning to get a little restless but we’ve got a lot of good work done in this time and hope to keep it up. America is also in a pretty serious state of turmoil so the atrocious acts of our government officials have also been fuelling artistic energy on all fronts.
Angie: As 2020 is coming to a close, what are your goals for 2021?
Isaiah: It’s tough to say with so much still up in the air! But we’re currently working towards releasing out debut full length record and are shooting for 2021 on that. Depending on the state of the world we would love to tour as far and as wide as possible but until we can guarantee that we will focus on writing and recording more music that we can stand by.
You can follow Jack Swing on Facebook, Instagram, and their website.

Shoutout to my friend Patrick for supporting the blog!

I am also an affiliate of MusoSoup*, a platform for musicians to efficiently share their music with thousands of bloggers, radio stations, and curators for coverage for a very affordable price. If you’re a blogger, you can sign up for free by contacting them. If you’re a musician, you can sign up and share your music with all the bloggers and content creators signed up on the website. If you sign up as a musician using my referral link, I get a commission, which helps keep this blog running and helps you get more publicity for your music.

*This is an affiliate link that you can use at no extra cost to you. I get $5 for every person who downloads the browser through my link. Downloading Brave (which is free) using my link is a nice gesture to support the blog at no out of pocket cost to you, but it’s not obligatory. For the MusoSoup affiliate link, I get 50% of the sign up fee for musicians. The cost is no extra if you use my affiliate link.