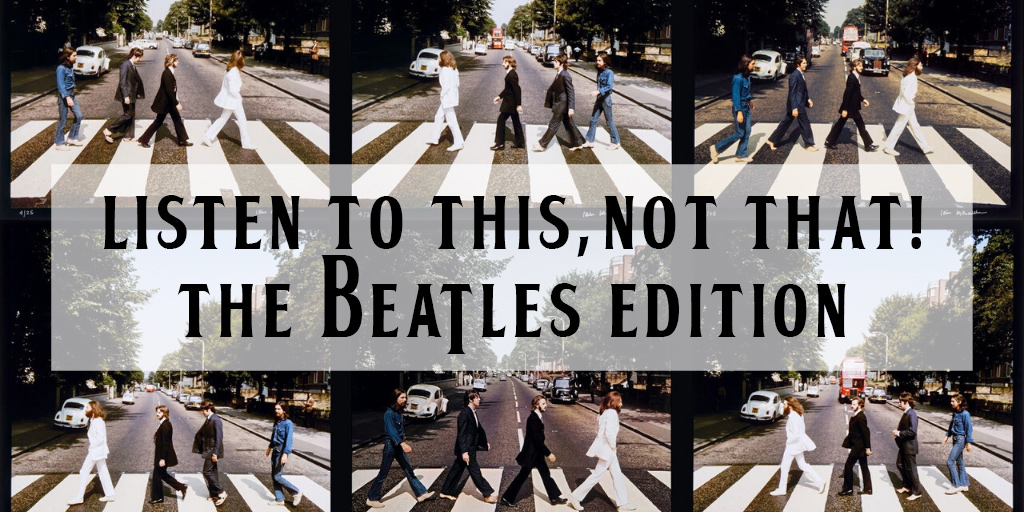 Ever get tired of hearing the same old classic rock songs on the radio? You and me both. I took a lot of driving trips with my parents throughout my childhood and I remember how tired they’d get of the radio even in the early 2000s. “Didn’t they play this song a 20 minutes ago?” My uncle used to say the radio stations just have 20 or 30 songs that they rotate through. You have an iPod? You can have your own radio station. Chances are, you’d have more variety than your local one.

There’s only so many posts I can write about the diversity of the musicians themselves and I don’t want to pigeonhole myself as the person who writes about rock stars of different ethnicities so I have to innovate and come up with fresh ways of telling the stories of classic rock. I was talking to my friend and the first major supporter of the blog, Patrick about how stale classic rock radio stations get and through this discussion we came up with this idea for a series called Listen To This, Not That!

In this series, I’ll be talking about all the major classic rock bands, first starting out with the basic, core ones that everyone knows and loves: The Beatles, The Rolling Stones, The Who, Pink Floyd, Led Zeppelin, and Queen. If a classic rock station had a starter pack, certainly those bands’ greatest hits albums would be in it along with some morning show with a chauvinistic DJ objectifying women and the other DJs being full of themselves. Thank goodness for iPods and Spotify.

Of course, we gotta start with (well pretty much) every classic rock fan’s gateway band, The Beatles. Without them, classic rock wouldn’t be the same. This blog post will also mark the blog’s first ever collab guest post, which will be coming soon. My friend, Dylan, will be sharing his favourite lesser known Beatles songs. You can follow him on Instagram: @cosmiccowboyy.

Not That! The Overplayed Beatles Songs

The Beatles in my opinion are the classic rock band with the most consistent discography. While only recording albums between 1963 and 1970, short compared to the other five classic rock bands, this was just right and you don’t see any decline in quality. People may cry about how they wish they were together longer, but honestly, I’d rather the band finish strong than finish weak with a “Trainwreckord” – as Todd in the Shadows puts it. If we’re going based on the UK discography and not including any compilation/live albums/anthologies or the like, The Beatles start with a bang with “I Saw Her Standing There” showing that they’re going to invade the hearts, brains, and souls of the world and change music history forever.

The way the Beatles ended their discography was equally as strong and iconic, with “Get Back” from Let it Be. Your fave could never. All the albums are pretty solid and all have so many single worthy songs. I can’t exactly say that for The Who and Queen, bands that I adore on the same level as The Beatles. Both of those groups definitely had a point in their discography where the albums didn’t have the same magic.

It’s hard to come up with Beatles songs that I hate. I guess “Revolution 9” would be that one song that just lowers their discography from perfect to almost perfect. As for overplayed, well that’s an easy one. Overplayed doesn’t mean bad, it’s just that the songs are played a lot. I still love these songs, but the radio and tribute groups play them so much that if they were vinyl, they’d wear out the copies really quick:

Basically, these songs are ones found on the Red and Blue albums, the famous Beatles best of songs. Reading these song titles, you can hear these songs in your head. I think this covers the ones I believe are the most played. They’re all great, but there’s more to the Beatles than this list of songs. Which is why I’m writing this blog post, to share the less appreciated Beatles songs.

It’s really hard to come up with a list and criteria for this list, but basically my rules are that the song can’t be a big hit (top 20 or higher) and it can’t appear on a “best of” album. With those rules in place, let’s get started.

“My Bonnie” (With Tony Sheridan)

This was The Beatles’ debut single, reaching only #48 in the UK and #29 in the US in 1962. The b-side, “The Saints” (a cover of “When The Saints Go Marching In”) has a Elvis/Cliff and the Shadows late 50s kind of sound – can definitely hear the influence Cliff Richard and Elvis had on The Beatles. This is the bridge between the two songs and it takes you back to when the 60s didn’t find itself yet.

“Cry For a Shadow”

I love 60s guitar instrumentals, like The Shadows and various surf rock bands. The Beatles tried their hand at this in the early days and did such a good job, but this got nowhere on the charts. Where are my “Cry For a Shadow” stans at?

With Ringo on lead vocals, this is a great cover of girl group The Shirelles’ 1960 song. And I love when he goes “Alright George” and it goes into a guitar solo. It was recorded on 11 February 1963 in one take. Ringo sang the song with the pronouns changed, but the Beatles didn’t care that there would be people saying it’s gay that they sang it. The Beatles said no to homophobia with this song.

Liverpool meets Motown on this song. From here, the ping pong match between the British rock bands and American R&B groups begins and they cover each other’s songs. Black American music had a real impact on The Beatles and other British rock bands and The Beatles proudly acknowledged this. As good as this song is, it didn’t chart that well in the US, only reaching #35 on Billboard (probably because The Fab Four were dominating the charts with other songs). The a-side, a cover of Chuck Berry’s “Roll Over Beethoven” with lead vocals by George is also amazing – love his voice.

Always loved this song. Surprised this wasn’t released as a single.

“I Wanna Be Your Man”

A song that both The Beatles and Stones sang, but The Beatles wrote it and the Stones released it as a single. Ringo’s on lead vocals on this one. Very R&B with the Bo Diddley beat.

George Harrison’s first song he wrote for The Beatles. He didn’t think much of it, but I like it. An introvert anthem? A social distancing anthem?

“I Call Your Name”

Did you know the Beatles tried their hand at a ska sound before “Ob-La-Di Ob-La-Da”? You can hear it at 1:10 in.

The b-side of “Matchbox”, which made it to #22 on the US charts. This is a Beatles song I haven’t listened to much, but I should listen to it more since I love early Beatles.

The B-side to “Can’t Buy Me Love”. Didn’t chart in the UK and only made it to #138 in the US. The B-sides deserve appreciation too. The cowbell!

The sad yeehaw Beatles song. The Beatles really did have a song for every mood.

A strong song from Help! Surprised this wasn’t released as a single.

“You’re Going to Lose That Girl”

Not released as a single. One word, bongos.

One of the few Beatles songs without bass. Has a country/skiffle influence. Yeehaw!

You’d think from this song that this is a Little Richard cover, but it’s not. Just very influenced by him. A real throwback to the late 50s released in 1965. This is another underrated B-side of a big hit, in this case “Help!”.

A song Paul McCartney wrote when he was going through difficulties in his relationship with Jane Asher. Has a Motown influence with the same chord sequence as The Four Tops “It’s The Same Old Song”.

This list will have a lot of George Harrison songs on it. Like a lot of Beatles fans, I wish that George got more chances to write songs for The Beatles. In this song, George gets political, but not overtly so in this song that criticises conformist society.

You know a discography is strong when there are non-singles that could have been singles. In a way it’s an updated “It Won’t Be Long”.

“If I Needed Someone”

Not only will you hear sitars on this George Harrison song, you’ll also hear tabla in the Beatles’ most Indian sounding song. George recorded this with minimal involvement from John and Paul. Anil Bhagwat played tabla on this song.

Psychedelic closing track of Revolver, not released as a single. One of those songs that’s hard to recreate live, a masterpiece.

“Within You Without You”

Another George composition with an Indian sound. This song replaced “Only a Northern Song”, which was originally supposed to be on Sgt Pepper, but put instead on Yellow Submarine. A Summer of Love song.

Another favourite track from Sgt Pepper. A cute song about a guy who falls in love with a meter maid.

A Beatles instrumental. I’m a sucker for instrumentals. Reminds me of stuff that could have been on the Wonderwall soundtrack.

B-side to the popular “All You Need is Love”. John Lennon wrote part of it after attending the 14 Hour Technicolor Dream.

This song has one of my favourite basslines. Fanny did a great cover of this song. One of the few Beatles songs written based on a piano riff. Needs more appreciation

One of my favourite Beatles songs ever. George Harrison wrote this song about Pattie Boyd. This song deserves your attention. Hard to play live and meant to be a studio song, but still, something you should appreciate.

I love Paul’s vocals in this song. Takes a lot of inspirations from the blues and R&B.

Has to be one of my favourite Beatles guitar moments. Such a good way to end the Abbey Road medley, well not if you count the hidden track “Her Majesty” as part of it.

Listen to the whole playlist here:

What are your favourite overlooked Beatles songs? Let me know in the comments section!

Shoutout to my friends Patrick and Matt for supporting the blog!

*This is an affiliate link. I get $5 for every person who downloads the browser through my link. Downloading Brave using my link is a nice gesture to support the blog at no out of pocket cost to you, but it’s not obligatory.