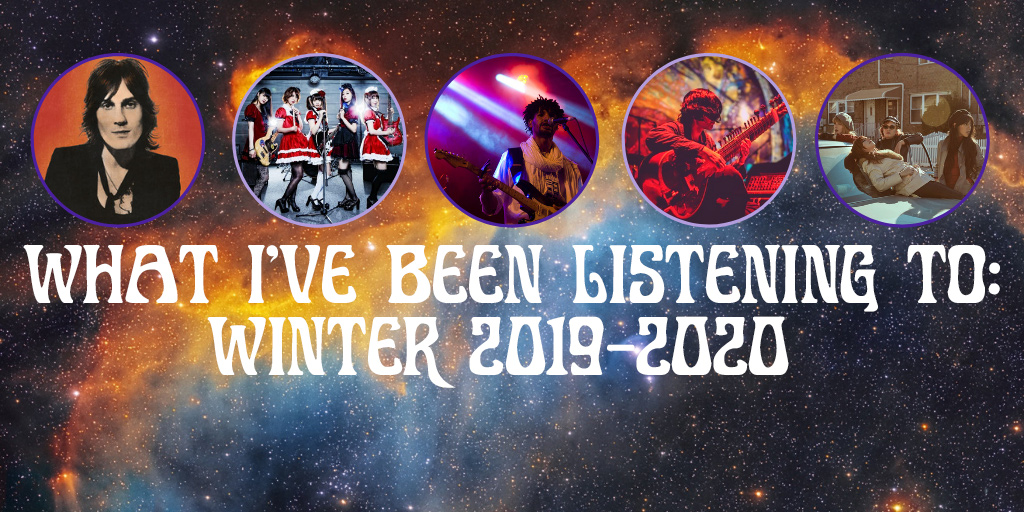 I know this is a bit late, but this year has been especially chaotic, but good music has no expiry date and I think it’s important to appreciate new music along with the classics from the past. I have been praised by musicians I’ve featured saying that I’ve given them a platform to share their work and get more publicity. SEO is super important and the more that people talk about your music, the better you do in the search engine algorithms.

This feature is a quarterly one and I do one every season, highlighting the best of new music. For the most part, I like to talk about bands that are smaller because we all know the larger groups get a lot of attention already, but if there’s something especially good, I’ll talk about it as well because why not? Small bands need our support and a good way to support them is by talking about their music.

What makes this series different from the other ones I do is I will not talk about classic rock acts’ new music at all. There are plenty of other posts on my blog where you can get your classic rock fix. This is my list of tastebreakers for classic rock fans, to broaden your horizons to new talents. Rock may not be the dominant genre now, but it’s far from dead and that’s what I want to show with this series. Enjoy!

I believe I heard about him from my dad who was watching TV and heard his music and thought it was something I would like. Gary Clark Jr is from Austin, Texas and has shared a stage with greats like Eric Clapton, Tom Petty, B.B. King, and The Rolling Stones. If you’re not listening to him already, you should be.

His music is a mix of blues, rock, and soul. While his latest album, This Land was released in February 2019, musicians often post remixes and bonus tracks from the album after the fact to keep it fresh, in case people missed it when it originally came out or to capitalise on its popularity. This isn’t the classic rock era when musicians released album after album in quick succession. Nowadays musicians release fewer albums and go on tour way more.

I have a mini series about political classic rock songs and here’s a modern one. There’s a lot to be angry about in today’s political climate of Trump, Brexit, and far right extremism emboldened by fascist leaders.

This version is a remix from Jimmy Fallon with The Roots, the house band for The Jimmy Fallon Show. It’s an interesting mix of hip hop, soul, and rock.

I found out about Brkn Love through fellow blogger Carmela Carr, who always has great suggestions. Brkn Love are from Toronto and have a modern rock sound with some inspiration from 70s hard rock. The strongest tracks in my opinion are “I See Red” “Shot Down”, “Flies in the Honey”, and the grunge inspired “In Your Hands”.

Another suggestion from Carmela. Tuk Smith was formerly the frontman for The Biters – a hard/glam rock band from Atlanta. Highly recommend their album, Electric Blood. If you like them, you’ll like this song. This is one of my favourites on the list and it’s a modern spin on classic rock: power pop and glam rock. I’m looking forward to hearing more Tuk Smith.

Found out about this band through Reddit. Their dress sense caught my eye as someone who is fascinated with Japanese culture and fashion. True to their band name, their fashion is based on that worn by those working in maid cafes. Founder of the band Miku Kobato, who used to work at a maid cafe, got the idea to juxtapose the maid cafe style with rock music. They don’t just take the style of maid cafe hostesses, they call their male fans masters, female fans princesses, and their live shows are called servings. The band’s influences are Japanese enka music, Carlos Santana, Deep Purple, Smashing Pumpkins, and Jimi Hendrix.

If you like heavier sounds, you’ll like the songs “glory”, “Liberal”, “Wonderland”, “Dilemma”, and “flying high”. If you want more pop rock (but still a bit hard rock), listen to “PAGE”, “endless Story”, “Mirage”, “azure”, and “Cartharsis”. Overall, it’s a lot of fun and a great listen and a great blend of pop and hard rock. Who knew it would be such a great combination?

I found out about this artist from Bandsplaining’s video about how the best guitar music right now is probably something you’ve never heard and coming from a part of the world you may not expect it to be coming from, the Sahara. He has a small playlist on Spotify featuring the music he was talking about in the video.

One artist on that playlist stood out to me, Mdou Moctar, who hails from Niger. He is of Touareg descent, sings in the Tamasheq language, and he’s one of the first musicians to perform electronic adaptations of Touareg guitar music. His music went viral through mobile phone music trading networks. In 2019, his first studio album recorded with a full band, Ilana, was released.

Ibitlan is his latest release, released in January 2020. His music is really psychedelic and I’m really happy to share it with you and make this list of new music the most diverse one I’ve made yet! Great music is made all over the world. Look outside of Europe, America, and Australia.

6. Age of Indica – Through the Eyes of Three

I found out about them from YouTube recommendations. Age of Indica are an heavy psychedelic rock band from South Africa. Their instrumental album, Through the Eyes of Three was released in February 2020. I appreciate a good instrumental and this album reminds me a lot of early 70s stuff, but heavier. While you can’t hop on a plane or go on a road trip, you can trip out and listen to this album. I find that instrumentals are best for work music so if you’re working from home and are in the need of heavy, dark, psychedelic sounds, this album is a good pick. My favourite tracks on it are “Sleep”, “Raise the Dead”, “The Call of the Void”, and “Eyes of Three”.

7. Elephant Stone – We Cry For Harmonia

I knew about this band back when I was getting into more indie rock music in secondary school. They are from Montreal. The first song I heard of theirs is the very 60s sounding “How Long” from their debut album, The Seven Seas. The band have a very psychedelic sound and use sitars in some of their songs like “Sally Go Round The Sun”. First things I thought of when I heard their sitar songs: George Harrison, Ravi Shankar, and Ananda Shankar. Their music is what you need in your life if you like raga rock. If you like Temples and Mystic Braves, you’ll really like Elephant Stone.

I can definitely hear Beatles and psychedelic influences on this latest track, “We Cry for Harmonia”. The intro reminded me of My Sweet Lord, in an amazing way.

This is a bit different from the rest and more poppy and disco-like, but I was recommended this on Spotify. Makes me think of Jamiroquai.

This is a band I’ve seen recommended to me on Spotify many times. The album artwork caught my eye, reminding me of stuff from the mid 20th century aesthetic Pinterest board. This song reminds me of something I could hear in the Life is Strange video game series. Definitely makes me want to go to Texas again.

Siena Root are a great modern day hard rock band. Every release impresses me. This song is from their recently released album, The Secret of Our Time.

I’m not sure how I found out about Yola, probably somewhere on social media. She was lead singer for band Phantom Limb, but later on went solo. Her album, Walk Through Fire, produced by Dan Auerbach, was released in February 2019, but in December a deluxe edition was released with some bonus tracks. I really enjoy her cover of Elton John’s Goodbye Yellow Brick Road. Last year I really started appreciating Elton John more thanks to the movie Rocketman. An interesting fact about her: her mother was not supportive of her going into music because it was too risky, and banned her from playing music. Yola was so dedicated to becoming a musician that she’d sneak out of her parents’ house and play gigs and at one point she was homeless in London after blowing through all her savings to try to make it in the music industry. Luckily it all paid off for her in the end and she got four Grammy nominations.

Habibi are a New York all girl group that mix psychedelia, garage rock, and 60s girl group sounds: all great 60s genres and are a good summary of what the 60s were all about. When I first heard their self titled debut, I wanted to hear more and this year, their sophomore album was released. They’re a modern day Shangri-Las, but make it psychedelic like the Allah Las. My favourite tracks on the album are “Bad News”, “Born Too Late” (what a relatable title), “Mountain Song”, “In The City”, and “Misunderstood”.

Last, but certainly not least, we get to this catchy pop song from Iceland that was supposed to represent the country in the Eurovision Song Contest this year, but that has been cancelled because of the coronavirus. Daði was born in Iceland and lived in Denmark for a lot of his early childhood. He is now based in Berlin.

I found out about this song because of Reddit and I think it’s so catchy and I love the synthesisers and disco inspired sound. Personally, I prefer the Icelandic version to the English version. I’m a sucker for poppy Eurovision songs.

*This is an affiliate link. I get $5 for every person who downloads the browser through my link. Downloading Brave using my link is a nice gesture to support the blog at no out of pocket cost to you, but it’s not obligatory.