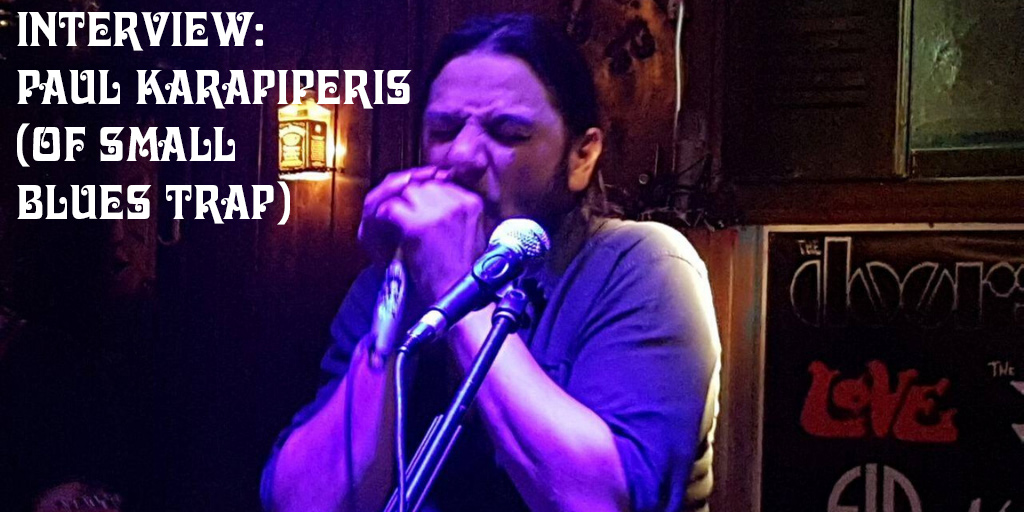 I had the privilege of interviewing Paul Karapiperis of Greek psychedelic blues rock band, Small Blues Trap. His latest album, Acoustic & Electric Growls, reminds me a bit of Santana, with a very dark, spooky, western kind of sound – perfect for the autumn. A very interesting and unique sound on this album.

If you want to learn more about the band, keep on reading:

Angie Moon: How did you get into blues music?

Paul Karapiperis: As [a] youngster, like everybody else, I was exposed to rock music that eventually led me to discover the roots, which is unquestionably the blues. It was like a spiritual call for me and I must admit that I was enchanted and thrilled to follow its paths. I felt like finding the key to the real world.

Angie: How would you describe your band’s sound?

Paul: First of all, I have to tell you that my personal albums contain songs that are somewhat different from those of my band, the Small Blues Trap. That is why they are not part of the band’s discography, but they are part of my own.

The songs represent our deepest approach to art and life in general and I think that the sound is shaped by the elements that come about from what we have absorbed.

The band’s sound consists of our passion for the blues music but it has flavours from other musical genres as well. We love to experiment with the music we play.

Angie: Which musicians inspired you the most?

Angie: What are your favourite albums of all time?

Paul: Τhe list is huge…Here are some of my favourites:

Angie: I noticed your previous albums are “put your own price” on your Bandcamp page. Why?

Paul: I want to give the chance to someone who doesn’t have the money to buy these albums to download them for free. Other stakeholders can buy the albums by paying the price they want.

Unfortunately or fortunately for many things in this area I work more with emotion and instinct, always knowing that an album is degraded when you only see it as a product that solely aims at making a profit.

Angie: Who are your favourite Greek rock and blues musicians?

Paul: My favourite Greek blues musician is Elias Zaikos and he’s a [founding] member of the first Greek band that made a pure blues album here in Greece at the beginning of the 80s, the Blues Gang (now Blues Wire). These guys have paved the path for us in the past, so we can play our music to a dedicated Blues audience.

By the way, do you know that Nick Gravenites, Alexis Korner and Johnny Otis have Greek origins?

Angie: What is the music scene like in Greece?

Paul: The production of artists has taken off. This has been certainly aided by the great ease by which one can today express one’s musical concerns and share them with the public. Rock music in today’s Greece is a musical staple that has managed to spread and has stopped being music for a few.

As for the blues scene, there are some clubs here in Greece that occasionally host some blues events among other musical genres but there is no club that hosts exclusively blues events. It’s very hard to make a living by playing the blues in Greece.

We are trying to reach our audiences on our own and because of our dedication -a key feature of every person in love- we still insist on playing the music we love.

Angie: Are more of your fans in Greece or elsewhere?

Paul: My band in its 15 years of existence has received encouraging comments and album reviews from the international press. Well known magazines have occasionally made presentations of our work. It is a great pleasure and honour for us. When someone finds interesting things in your music, you can only feel great and try to do what you do with more dedication so as to become better.

From then on, I believe that modesty is an essential prerequisite for any man who makes true art and does not want to fool himself. If you stay in some good reviews and nothing else, you are lost!

Unfortunately, we haven’t had the chance to play outside Greece so far. That ’s why I believe that more of our fans are in Greece.

Angie: Is it more common in Greece to record music in Greek or in English?

Paul: It is more common to record music in Greek. The English-speaking music scene in Greece made its first timid steps somewhere in the late 1960s with rock bands such as Aphrodite’s Child and Socrates Drunk The Conium. Those bands have had great success internationally and have made other musicians believe that they can succeed in singing and recording in English.

So many great bands were formed, but the English-speaking rock in Greece has never received the popular acceptance equivalent to the Greek-speaking music. Nonetheless, I think that the English-speaking Greek scene is probably at its peak right now because there are many notable bands that have raised the standards of making good music.

Paul: I recorded and mixed this album –just like the previous ones- in my own home studio. It’s like a hideout in which I’m exploring and experimenting with new sounds. Using various audio patents I try to open doors that I had not previously opened, thus creating my own music language.

I would also like to say that a great part of what you hear on the album has been the fact that they participate in it, apart from the members of my “Small Blues Trap” family (Panagiotis Daras, Lefteris Besios, Nikos Konstantinou), the select ones friends and companions Vassilis Athanassiadis (No Man’s Land, Terrapin), Manolis Aggelakis (Illegal Operation, Appalachian Cobra Worshipers), Panos Badikouthis (Blues Trackers), Nicholas Psarras (Hangry Birds), Ilias Lintzos (Bonfire Radicals). They are talented musicians who each have their own stamp on these songs. I’d like to thank them all from the bottom of my heart, it’s a great pleasure and honor for me!

Angie: What are the songs on the album about?

Paul: Τhe lyrics of the songs I write come from what I experience, what I imagine, and what I observe. Nowadays, we should all try to resist the paranoia around us. Racism, difficult relationships between people and economic hardships are key features of the society we live in. All these features cannot leave me unaffected. My songs don’t drip honey…radio successes can hardly be made…but they are made of all that I had locked in my mind in recent years and I was slowly pulling them out through this album.

Angie: What advice do you have for musicians?

Paul: Open your mind, be who you are, and find ways to use your music that can bring happiness to yourself and the others.

Loved this post and want to see more great posts like this and show your appreciation for The Diversity of Classic Rock? Chip in some money on Patreon (monthly donation) or PayPal (one-time donation). Or buy my merch or my photography prints on RedBubble.

Or donate your writing or art talents to my blog, contact me here if you’re interested in collaborating. All of this is totally optional, but extremely helpful.

If you cannot afford to donate to The Diversity of Classic Rock, there are many free ways to support the blog: clicking that follow button on my website, turning off your AdBlock; following me on Facebook, Twitter, or Instagram; liking posts, sharing posts; leaving nice comments; or sending your music for review. You can also download the Brave Browser using my referral link (I get a small commission) and earn tokens that you can donate to your favourite creators (including me!). Thank you!