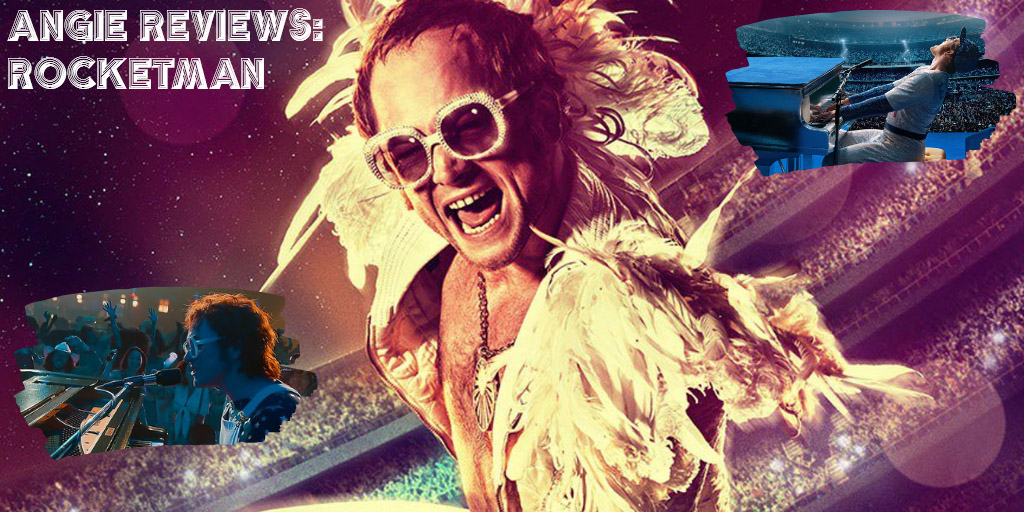 I was looking forward to Rocketman since I saw the trailer. Is this going to be another Bo Rhap moment? Even better? Are we going to have a Classic Rock Cinematic Universe? If we do, I’m living for it.

The aesthetics were on point, the movie looked colourful, exciting, and like a beautiful way to tell the story of Elton John. If you want to find out more… keep on reading! As this is a review, spoilers obviously.

The movie is directed by Dexter Fletcher, so if you see some sort of similarities between Bohemian Rhapsody and Rocketman aesthetics wise, that may explain it. However, there are a lot of differences as far as narrative and how everything is connected.

The movie stars Taron Egerton of Kingsman fame as Elton John. He did all the singing in the movie, which really impresses me. Other people considered for the starring role include Justin Timberlake (actually Elton John’s first choice), Daniel Radcliffe, and James McAvoy. Other actors in the movie include: Jamie Bell as Bernie Taupin, Richard Madden as John Reid, and Bryce Dallas Howard as Elton John’s mother, Sheila.

Rocketman isn’t out yet in America, but in the meantime, you can enjoy the music from the movie:

This movie is no Bohemian Rhapsody when it comes to talking about the flaws of the protagonist. That movie definitely didn’t talk much about Freddie’s personal life, which makes sense, he was a private person. Rocketman doesn’t gloss over Elton John’s drug and drinking problems, bulimia, and family problems (if these subjects trigger you, you may not want to see this in the cinema). It really doesn’t. It’s like BoJack Horseman in that way, talking about real life problems in a relatable way. Like any biopic, I would say this has crossover appeal to not just Elton John fans, but also people who like human interest stories.

As I was in the cinema watching the movie, I was excited when I saw the title come up and Elton John walking through a door down a corridor in an elaborate stage costume. What happened next, I was not prepared for. He shows up to what looks like an AA meeting (actually a therapy group session in a rehab centre), introduces himself as Elton Hercules John, and confesses that he has all these mental health issues. Wow, this is deep and dark. This therapy session is the frame that tells the story and links everything together. Elton reflecting on his life from his childhood to stardom to all the problems he experienced all the way. Throughout the movie, songs that relate to his life are played in

This isn’t your average musician biopic and Elton John isn’t a garden variety musician. Hollywood is lacking creativity and it’s always good to see something fresh and different, that breaks the mould.

Our first flashback is to his childhood to the song “The Bitch is Back”, when he was known as Reggie Dwight. His father was not very loving and that had a profound effect on him. To cope, he’d play piano and he was a prodigy. He could play songs by ear on the piano and his grandmother and mum said that he should invest in getting lessons. The lessons pay off and he wins a scholarship to study at the Royal Academy of Music, where he would play classical music on piano. Later, he sees his mum cheating and his father leaves without even a hug.

His mum gets a new boyfriend and he’s supportive of Reggie’s love of rock music and they get him some Elvis records and a gig at a pub. During this scene, they sing “Saturday Night’s Alright For Fighting” and dance at a carnival. Definitely one of my favourite musical scenes in the film.

Later, he joins Bluesology and gets a lot of inspiration from backing American soul and R&B musicians who tour in the UK, even gets a kiss on the lips from one musician. He later wants to be a star and goes to DJM Records and auditions by playing something on the piano that he improvised and called himself Elton John for the first time. Fun fact: in the movie it shows him getting the name Elton from a Bluesology bandmate (true) and John from John Lennon (not true). John was actually after another Bluesology bandmate, Long John Baldry.

However, he didn’t have any lyrics. Enter Bernie Taupin, a great lyricist who proclaims himself to be tone-deaf, and we have a complementary team who will take over the charts. They didn’t get fame straight away, but after a couple years of hard work and living frugal, they get to LA.

Elton crosses the pond and the American continent and gets to the world-famous, iconic Troubadour in LA and plays an electrifying show. So electrifying that he floats for a moment and so do the crowd. This was another favourite moment in the movie. The show went so well, that he gets invited to play more shows in California and gets invited to a party Mama Cass is throwing. The party looks like a hippie dream and Bernie finds love with Heather and Elton feels lonely at the party, wandering and singing “Tiny Dancer”. Elton isn’t lonely for long and he gets into a relationship with his manager, John Reid (you may remember this name from Bo Rhap, but his personality is so different in this movie).

This movie doesn’t hide anything and there’s a sex scene with Elton John and John Reid to the song “Take Me to the Pilot”. This is pretty significant because it’s the first major Hollywood production aimed at mainstream audiences to show a gay male sex scene on screen. In my opinion, this movie did a better job than Bo Rhap in gay representation.

His relationship with John Reid though was toxic and while I wouldn’t say that Reid was as bad as Paul Prenter, he was not nice to Elton John and they argued. To deal with all these problems, he turns to drugs and drinking. Still, he continues to record music and tour all over the world. You see him recording “Don’t Go Breaking My Heart” with Kiki Dee in a short scene. I was actually surprised that this scene wasn’t longer because this was his first #1 in the UK.

However, his interpersonal relationships are turbulent and he snaps at people close to him. Just before his show at Royal Albert Hall where he plays “Pinball Wizard”, he gets out of the car to make a phone call coming out to his mother, gets punched by John Reid, then snaps at Bernie Taupin and tells him that “People don’t pay to see Reginald Dwight, they pay to see Elton John.”

He’s back at his mansion in LA to throw a party that he forgot was going to happen and he nearly dies, taking lots of drugs, drinking, and attempting suicide jumping in the pool. The title song “Rocketman” plays and Elton sees little Reggie playing piano at the bottom of the pool and they sing. He gets rescued out of the pool, taken to hospital, and swiftly taken to Dodger Stadium to play an iconic show, the highlight being dressed up in a baseball player’s uniform and swinging a bat, singing “Bennie and the Jets”.

He goes back to the studio to do more recording and marries his friend, sound engineer Renate Blauel. Their marriage isn’t a happy one because Elton John is hiding his sexuality. Elton John argues with his mum and his close friend, Bernie.

To complete the whole frame narrative of the rehab therapy session, we see him leave a concert at Madison Square Garden in his costume taking a taxi to a rehab centre. Bernie visits him and tells him to start writing songs again when he’s ready.

The movie ends with him leaving the rehab centre, sober and dancing and singing, happy again.

In the credits, it’s revealed that Elton John has been sober for almost 3 decades, started the Elton John AIDS Foundation, got married to David Furnish, and adopted 2 sons. Then you see pictures of scenes from the movie and real life pictures of Elton John that they were based on. In this part of the credits, you can tell how much attention to detail there was in the creation of this movie. Well done!

If you want to be picky, yes, the songs aren’t in chronological order, but that’s okay. The songs and visuals beautifully tell the story of Elton John’s rise to fame. Taron’s acting as Elton John was great and his vocals make the movie. The costumes were on point and I wish for a couple of things: a time machine to see Elton John at the Troubadour and a clothing line that reproduces all the cool things Elton John (and other rock stars) wore. If you like musicals, you’ll like this movie. An absolute must-see if you like Elton John.