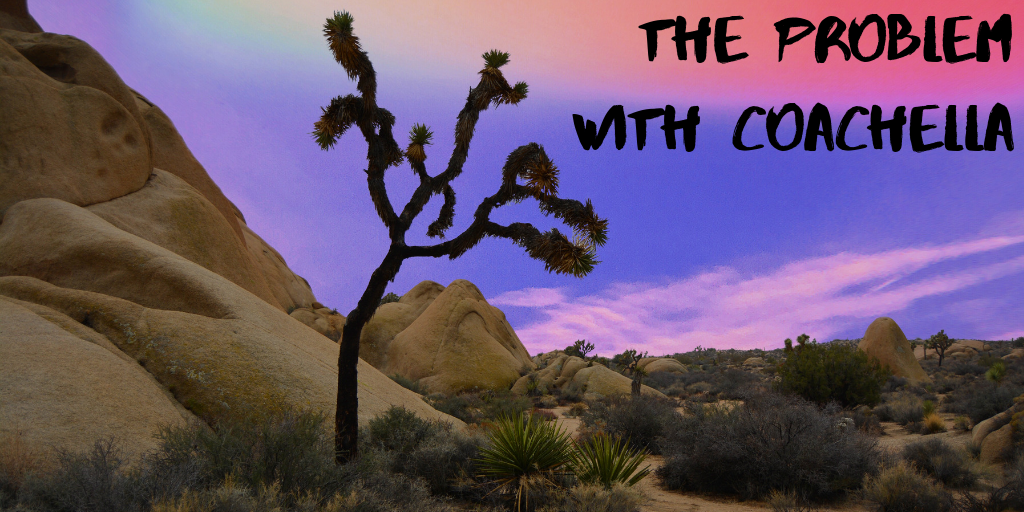 It’s another weekend of Coachella and that means your Instagram feed might be full of pictures of these bougie influencers flexing their money with these expensive outfits that look cheap. The main problem isn’t that Coachella is full of rich people and isn’t accessible to all. Sure, that is a problem, but we have an even bigger problem on our hands. The guy who owns the festival, and this whole problem with festival culture.

Hot take: I don’t like music festivals and I probably wouldn’t go to one, unless I was magically able to teleport myself to either Woodstock or Monterey Pop Festival. Since that’s not possible, I’m not going to music festivals anytime soon. Even if you gave me a ticket to one, I’d probably sell it. I don’t want to be stinky or gross. I don’t like camping. I don’t care about most of the acts. I hate large crowds because they give me anxiety. I have way better things to spend my money on. For the cost of a festival, I might as well go to London for a weekend, see a concert, have fun and go home.

This video by Tiffany Ferguson inspired me to write this blog post and I found her video super informative. Give her channel a watch if you haven’t already. She’s nuanced when it comes to looking at issues, presents her arguments well, and she’s really thorough. Gotta give credit where it’s due.

The Coachella Festival is getting the same scrutiny that Chick Fil A was getting, about their owner’s anti-LGBT stance and conservative Christian values. If you are a supporter of LGBT rights, you shouldn’t go to Coachella or play there, right? We’ll discuss why it’s not so simple in a later section about general problems with music festivals.

Coachella, or Coachella Valley Music and Arts Festival, was established in 1999 and takes place every spring in Indio, California, in the Inland Empire, not too far from Joshua Tree National Park and Palm Springs. It originally began as a one day event, but it’s expanded since then. Since 2007, it has become a 3 day event and since 2012, there’s two weekends with identical lineups, due to increased demand.

The types of music you’ll hear there are: pop, electronic, hip hop, indie rock, and the occasional older band that have reunited for the festival. Tickets for Coachella 1999 cost $50/day ($76 in 2019 dollars).

For this year’s festival, it starts at $429 for general admission, VIP starts at $999 for basic package, even more if you want the “glamping” experience. If you want to camp, it will cost you extra. If you missed out on advance sale and you’re trying to buy tickets secondhand, even more money. It’s not cheap, especially if you are travelling a long distance to get there.

Who owns Coachella and why is it a problem?

After that little bit of exposition so you get the context, here’s the important bit. The festival was started by a company called Goldenvoice, but they were bought out for $7 million in 2001 by AEG. What an investment. Eventually, it paid off for them. So who are AEG and what does that acronym even stand for?

AEG stands for Anschutz Entertainment Group, which is part of the Anschutz Corporation, started in 1958. This corporation own a lot of things. Philip Anschutz was one of the founders of Major League Soccer and he owns a bunch of sports teams and stadiums. They have real estate interests. Most importantly, and what this blog post is focussed on, they control a lot in the music industry.

Like any big company, AEG have gotten themselves into controversy. First, we’ll start with one that was a while back, Michael Jackson and the This Is It residency in London. This Is It was supposed to be his farewell. It didn’t happen obviously, because he died weeks before it was supposed to start. Ticket sales were record breaking. The controversy though were these things: AEG were cashing in on Michael Jackson’s death by holding a public memorial service in the Staples Centre in LA, which cost the city $3.2 million. Of course, since the concerts weren’t happening anymore, AEG were trying to figure out how to recoup money, so they offered two options for people who bought tickets: full refund or a cheap looking plastic 3D lenticular souvenir ticket and memorial booklet, but you forfeit your refund. Taking a look at eBay, I see that some of these tickets are being sold at a loss. They’re only worth what people are willing to pay.

Now, let’s go more current with the controversies. This article from Pitchfork details the problem with Anschutz’s politics. Philip Anschutz himself is a quiet, media shy person. He doesn’t grant interviews really, and every time he’s asked, he denies being homophobic and plays dumb when he’s caught donating to conservative Christian groups. The tax filings and this infographic though, say otherwise. By donating to the Alliance Defending Freedom (yeah… freedom to discriminate and oppress), he’s enabling discrimination and anti-LGBT bills being proposed. He has also donated over a million dollars to Republican politicians in 2016. We need money out of politics, full stop. It’s the reason America doesn’t have Medicare For All or tuition free university for all citizens. These are policies most Americans, even a large number of conservatives and independents, support.

It’s no surprise he’s a conservative, he’s a billionaire after all. I understand fiscal conservatism, like lower taxes and stuff, from rich people, but social conservatism? Why? How are gay people hurting you?

There are a few problems with festivals: Environmental impact, the control it has on concerts and who can play where and when, and the general problems of conglomerates and corporatisation of music.

Festivals are not so kind to the environment. People litter, leave stuff behind, there’s food waste, cigarette butts get left everywhere, a lot of debris, and lots of cars driving. One of my friends went to Burning Seed in Australia, and what I love about it is they have a principle called “Leave No Trace”, reminds me of what I learnt in Girl Scouts, leave a place in the same condition you found it or preferably, better condition.

If you want to lower your impact, consider taking a bus or carpool to a festival, eat vegetarian or vegan meals, use reusable cutlery and water bottles, clean up as you go, carrying an ashtray if you smoke, and respect the wildlife.

Festivals have a chokehold on the whole industry of concerts. Often, festivals like Coachella or Lollapalooza (the latter is owned by Live Nation) have a radius clause, a type of exclusivity clause that ensures that people who want to see these musicians have to see them at this festival, because it’s their only chance to see them in that area for a while. These clauses though are not black and white, and there’s negotiations involved for each musician. Can’t afford the festival or have no interest in it otherwise? Tough. These exclusivity clauses don’t just hurt fans and artists, but also independent venues, who can have a hard time getting musicians to play. A lot of Chicago venues struggle with it because of Lollapalooza. What’s a real punch in the gut is that the courts side with these festivals on the radius clause issue, calling it totally legal, even though it monopolises the music industry.

Being from Chicago, I hated Lolla because it’s always right around my birthday, and that meant I couldn’t go to downtown Chicago to celebrate because it would be packed.

In the Pitchfork article I linked earlier, they talk about how in 2017 Japanese-American musician Mitski basically said she was stuck playing the festival and it would be worse for her to not play it. I speculate because of contracts and not wanting to burn bridges because AEG own a lot of venues (this is just my theory, not fact).

AEG are a large company and that is a problem. What happened to the good old days when the government broke down these companies that got so big that there’s no competition, so prices are inflated and there’s nothing you can do about it? Fed up with exorbitant ticket prices? You know who is to blame, these big promoters that own everything: ticketing, venues, festivals, promotion, etc.

Where do we go from here?

It seems like if you’re a music fan, no matter what, you’re going to be giving some money to Mr Anschutz, ugh. It really sucks. Boycotts send a message that what they’re doing isn’t acceptable, but with a big company, it’s really hard to do. At the end of the day, it’s up to you to decide. I’m not here to judge.

I guess the best thing to do is to support smaller, up and coming musicians and independent venues. These shows are cheaper too, sometimes free, and small gigs can be just as enjoyable. If you want money to go directly to independent musicians, buy their music on Bandcamp or donate to their Patreon pages. When creatives are supported, they can continue to create content. Creating content costs money.