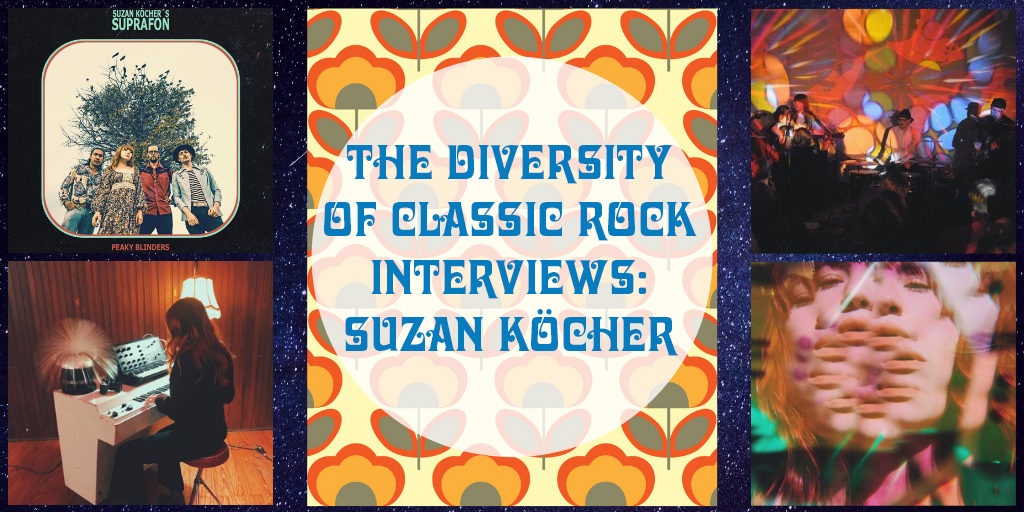 Today, folk/psychedelic rock musician Suzan Köcher released her latest single, “Peaky Blinders”, which will be on an upcoming album, Suprafon. Her sound is inspired by krautrock, psychedelic rock, folk music, and French pop of the 60s.

You can stream the single on Spotify. I love the single and I am looking forward to the new album.

Angie Moon: How did you get into music and the style of the 60s and 70s?
Suzan Köcher: Since my early childhood I’ve always been surrounded by music. My father played us a lot of old records by the likes of Queen or Cat Stevens and that shaped my perspective on music.

So that kind of sound has always been around. The whole band is listening to a lot of music and we all find different kinds of music on flea markets, record shops or the internet. So we constantly find new interesting sounds that inspire us.

Friday @blackberriesofficial will play @reeperbahn_festival at 10:30 pm. I‘ll join them on their trip to Hamburg – so if you’re around please say hi! Any recommendations which bands I should see? ~ • • • • • • • • #reeperbahnfestival #austintx #vintagedress #texanrain

AM: How did the band meet?
SK: We’re from a town called Solingen and we have all played in different bands for quite some time. We shared the stage a couple of times so we knew each other. Jens and Julian played in bands together for a long time and they invited me to sing a couple of tunes on one of their shows. So it all developed from there on. About three years later we met Alfie at a show in Cologne. He shares the same love for music with us so that was a natural fit and completed the band.

We proudly present to you “Peaky Blinders” – the first single of our upcoming album. Link in bio -> @suzankoecher Special thanks to @initiativemusik & @uniquerecordsger for making it possible ♥️

AM: What was writing and recording “Peaky Blinders” like?
SK: Our drummer and synth player Jens came up with the idea for the synth line of the first part of the song. He composed it late one night on a Moog Prodigy and played it back to us the next day.

Then we developed a groove to it and built the song from there and it all fell into place quite quickly. The recordings in Austin went very well because we had a clear vision of it in our heads and knew where we wanted to go. It’s always great when you hear a song coming to life on a recording.

AM: Which musicians inspire you the most?
SK: I listen to a lot of French 60’s singers and songwriters like Françoise Hardy and Serge Gainsbourg. [In] flea markets, we also find many records outside the pop and rock scene like Turkish, Indian, or African traditional music. Since we’re surrounded by a lot of new bands while we’re on tour and on festivals we also listen to a lot of current stuff.

AM: What are your top favourite albums of all time?
SK: That’s always a tough question as there are so many great albums out there. Some all time favourites are Pet Sounds by the Beach Boys, Blue by Joni Mitchell, and La Question by Françoise Hardy. And there are obviously many Beatles records that would fit the “all time favourites” list.

AM: What have you been listening to recently?
SK: Seasons Of Your Day is a record that I have returned to quite a lot recently. But there’s a lot of different music flying around the rooms depending on what mood I’m in.

AM: Who are your favourite musicians you’ve seen live?
SK: In our hometown we have seen a Canadian singer called Jerry Leger with his band The Situation. He’s a great songwriter and put on a fantastic show that we all enjoyed a lot. Another memorable night was the concert of Biche – a psychedelic band from France – who played at a concert series called Ritus. We’ve also seen the Rolling Stones last year which probably had the biggest impact on us. It was impressive and moving to see all these legendary musicians in one place playing their songs.

AM: What is the music scene like in Germany?
SK: There is a lot going on at the moment. We have many friends who make great music. Our guitarist Julian fronts a psychedelic band called Blackberries, our label Unique records releases a lot of great records by the likes of Love Machine or The Mañana People. Other great bands are Fooks Nihil and Okta Logue with whom we shared the stage many times.

AM: Why did you choose to record the upcoming album in Austin?

SK:   I visited Austin while the Blackberries played SXSW. On the last day of the trip Matt Parmenter invited us to his studio to record a couple of songs. We really enjoyed the experience, loved the studio, and Matt’s a great guy who’s fun to work with. So we wanted to come back and record the next record with him in Austin. Also when you’re so far away from home it’s easier to put your complete focus on the music without getting distracted by daily life.

AM: What did you like best about the time you spent in Austin?
SK: Recording music in the birthland of Rock’n’Roll was a wonderful experience. Compared with Germany, being in the USA almost feels like you’re in a movie. We had time to focus on our music and at the same time visited vintage clothing shops, music and record shops and went to a couple of concerts.

Recordings are finished, so we made a little daytrip to San Antonio and payed @robotmonsterguitars a visit – what a fantastic place 🤖~ 📷 by @cristobal_jurado • • • • • • • #vintageguitar #sanantonio #usa

AM: How do you compare playing at festivals versus typical concert venues?

SK: Playing in concert venues is a more intimate experience. Usually the people come there to see you. On festivals you often play in the daylight and there are a lot of new people that have never seen you before. It’s a different kind of challenge. We enjoy both, though.

AM: What is the proudest moment in your career?

SK: It’s impossible to pick one moment. We’re glad to be able to put out music and have people listening to it. It’s always a great feeling when you hold your record in your hands for the first time.

AM: What advice do you have for aspiring musicians?
SK: Be real and keep going.

She and her band will be performing at SXSW in Austin on March 16th.

Loved this post and want to see more great posts like this and show your appreciation for The Diversity of Classic Rock? Chip in some money on Patreon (monthly donation) or Ko-Fi (one-time donation). Or buy my merch or my photography prints on RedBubble. Or donate your writing or art talents to my blog, contact me here if you’re interested in collaborating. All of this is totally optional, but extremely helpful.