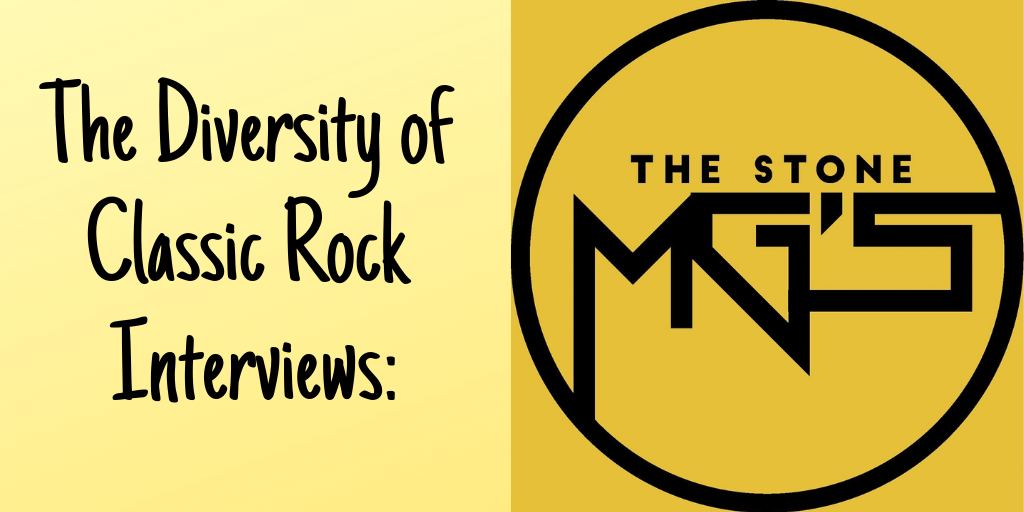 The Stone MG’s are an Austin, Texas based R&B and classic rock inspired band with a good sense of humour. They are made up of Rodney James and SJ Warman. They released their debut single “I Need You” back in November and they’re here to talk with us about their music and more.

Chatting with The Stone MG’s

Angie Moon: How did the band get started? Tell us your story in a nutshell.

SJ Warman: We used to play together many years ago but went our separate ways. Some time later, and for different reasons, we both walked away from making music in the space of a decade.

Rodney James: I had a development deal with a label through, at the time, a big-time Grammy winner who shall remain nameless. We recorded an album in relatively short order. Then this guy sat on it for almost two years, never released it.
At one point, people just stopped returning calls. It was disheartening, to say the least. So I walked away until Warman called and pulled me back in. So, yeah, I felt a little like Michael Corleone in the Godfather III.
SJ Warman: I have similar story, though it involved working in sync licencing. I was in a partnership where we had some big wins: Syncs on both major and cable networks, even theme songs to short-lived shows on both ABC and Showtime. The run lasted about six years before it dried up, but we actually hadn’t recorded together in years. There’s a lot of reasons why, which, in hindsight, seem like rock ’n’ roll cliches, but that’s what it was.
After that, I took a long break from music. But what I found is that I couldn’t ignore the itch forever. There was still music inside but I needed the right partner. Then I remembered Rodney. I called him and asked him to do a song.
Nothing more than that. No talk of a band or any megalomaniacal scheme for world domination; It was all about the song. We were incredibly happy with the result, so we did some more. And then it was like — BAM!!! — The Stone MG’s are born!
Angie Moon: What’s the music scene like in Austin?
SJ Warman: In Austin’s heyday, you had this place where the cowboys and hippies got along. I suppose the music reflected that kind of acceptance. You couldn’t point to anywhere else in the state where the same thing was happening.

“In Austin’s heyday you had this place where the cowboys and hippies got along.”

There was Willie [Nelson], Roky Erickson, the Thunderbirds, Stevie Ray [Vaughan], Townes Van Zandt, Daniel Johnston, or even punk bands like the Skunks. It lasted a long time in hindsight. Maybe the Arc Angels marked the end of it. Who knows really. That’s a good marker for me, but it’s certainly not a ding against the other bands, the Gary Clarks and Fastballs that found mainstream success; That was just when the city started to change in an economic sense.
Because most of those bands, if they were to start out in the Austin of today — their level of talent in whatever happens to be the flavour of the day — they would struggle greatly because the vast majority of artists can’t afford to live in the city limits. And that means a great deal because real estate also affects business and the types of businesses that can survive, or even thrive.
Austin used to be dirt cheap, a dirty cheap city that loved live music. That’s what brought in all the creative-thinkers/music-makers. A lot of great venues popped up to meet that demand. It wasn’t Dallas or Houston. It was a liberal outpost in the heart of Texas, as they like to say, in a giant elephant of a red state.

Even though it’s the capital, most of the politicians didn’t like it there. That was the perfect breeding ground for what made it what it was. And it’s just not that anymore. There are still venues around like the Saxon but that was saved by Gary Keller of Keller Williams fame. The city would have eaten it up like it did countless others before it, if it wasn’t for him.
So, when people call it the “Live Music Capital of the World”, it’s really nothing more than good marketing for tourism. The reality is that there are a lot of cities in the South with the same or similar acts rolling through, where you can find a few Chili’s, a couple Bed Bath and Beyonds, five or six Walmarts.
Angie Moon: What albums and bands shaped your sound?
Rodney James: From my end, I think a lot it comes from all the old R&B and Motown records my dad used to play. Those songs really stuck with me. So much so that I’m still listening to them to this day.
SJ Warman: Early on, it was a lot of the classic stuff. Mainly Zep. I caught on to the Stones from there — the Exile on Main Street, Some Girls ‘70s Stones. That led me to the New York Dolls and Thunders’ Heartbreakers. I was also captivated quite a bit with Marque Moon by Television.
Angie Moon: How did you get into classic rock?

SJ Warman: Rodney has a similar story, but I really have to credit my dad with that. If he wasn’t listening to Hank Williams or Merle Haggard, it was Zep. I certainly appreciate a good song, regardless of the genre, but when I heard Jimmy Page’s guitar, I was pulled toward it like iron to a magnet.

Angie Moon: What inspired “I Need You”?
SJ Warman: Living life and observing addiction. If you think about it, it’s everywhere. It’s sugar, alcohol, Xanax, iPads, Facebook, etc. We wanted the song to take the listener on the journey of addiction as it takes over, corrupting and distorting reality for the user.
When Rodney sings “Shelter undercover, desire never satisfied,” the background vocals personify the persuasiveness of the addiction: “If you scream you love me, I’ll be your whore and give you the only thing worth dying for.”
Angie Moon: I see that you’re offering the single, “I Need You” for free, why?
Rodney James: Because no one will buy it. Just kidding. Kind of. I mean, with all the streaming going on, the songs are already out there. We didn’t see a need to put an obstacle in front of the fans that want the high-quality audio like .flac or .wav right now.
Angie Moon: What are you planning for the upcoming EP, Good Times?
SJ Warman: We don’t have that figured out quite yet. What we’re hoping to achieve is some kind of an interactive experience for our fans.
I still remember the feeling of getting an album from one of my favourite bands; Maybe one I’d waited months, or even years for.
I’d love to dig-in and dissect all the liner notes and artwork as I’d listen. Well, we want to bring that kind of experience online. At least, that’s the goal. The music is mixed, mastered, and ready-to-go, but there’s still a lot of work ahead. We’re shooting for February.
Angie Moon: Favourite concerts you’ve been to?
Rodney James: The Rolling Stones. Mick Jagger was still just as alive and vibrant as he was in his 20s and 30s. I think this was 7-8 years ago. It’s really amazing that he’s still doing what he does so well.
SJ Warman: Too many to count. I saw Roger Waters perform the Wall. There really isn’t anything like it. Hands down, best performance of any kind that I’ve ever seen.
I was there for a Television reunion with Tom Verlaine and Richard Lloyd that was incredibly special. I snuck away from my group and got up so close that I could see the dead skin on their fretboards.
I caught a Levon Helm performance at his barn. He did a lot of old Band songs. “[Up On] Cripple Creek”, “The Night They Drove Old Dixie Down”, “The Weight”.
Larry Campbell, who played in what might have been Bob Dylan’s coolest band ever with Charlie Sexton, was his band leader.
There was also an Austin band called Storyville that I would go listen to back when I was too young to get into the clubs.
Malford Milligan was — and still is — a beast on vocals.
Ian Moore absolutely tore up the Continental Club one night I was there. Look up his version of “Many Rivers to Cross” and imagine hearing that five feet from the stage with maybe 50 people in the audience. Rodney was there with me on that one. Amazing show.
Angie Moon: Favourite songs to cover?
Rodney James: I used to do a version of “Break on Through” with an old band that I’d love to revisit one of these days. Morrison really wasn’t much of singer in a technical sense but he had an incredible style and left countless imitators riding the waves of his wake.
Angie Moon: If you could collaborate with any musician, who would you want to collaborate with?
Rodney James: Brittany Howard of the Alabama Shakes. She’s amazing.
SJ Warman: Keith Richards. Does anyone have his number? I’d settle for Micawber if Keith can’t make it. Or even an autographed Marlboro Red butt from his ash tray. That sounded much dirtier than intended, but doesn’t make it less true.
Angie Moon: What goals and plans do you have for the new year?
SJ Warman: Release the Good Times EP and keep on recording. We’ve got enough material for a full album, but we’ll likely divide it up so we can release songs with more frequency. It’s not really an album world anymore. Maybe that’s a good thing. Maybe it’s not. I might have to get back to you on that one.
Angie Moon: What would you say is your proudest moment in your music career?
Rodney James: The fact that we haven’t killed each other yet.
SJ Warman: Same here. Seriously — same here.
Angie Moon: What would you like to say to your fans?
SJ Warman: Thank you for your kindness. No matter what kind of mood I’m in, it always makes me feel better to hear when someone responds to the music in a meaningful way.
Rodney James: I feel the same. When our motivation fails us, as it does from time-to-time, a connection with someone and your music is all the fuel for the fire that I need to keep a light on the path ahead.

Loved this post and want to see more great posts like this and show your appreciation for The Diversity of Classic Rock? Chip in some money on Patreon (monthly donation) or Ko-Fi (one-time donation). Or buy my merch or my photography prints on RedBubble. This is totally optional, but extremely helpful. Every little bit helps.

All Diversity of Classic Rock content will remain free, but Patrons get some nice perks, like early access to blog posts, birthday cards, Skype calls with me, and exclusive behind the scenes posts. Every dollar helps. If you cannot afford to donate to The Diversity of Classic Rock, there are many free ways to support the blog: clicking that follow button on my website, turning off your AdBlock, following me on Facebook or Twitter, liking posts, sharing posts, leaving nice comments, or sending your music for review. Thank you!