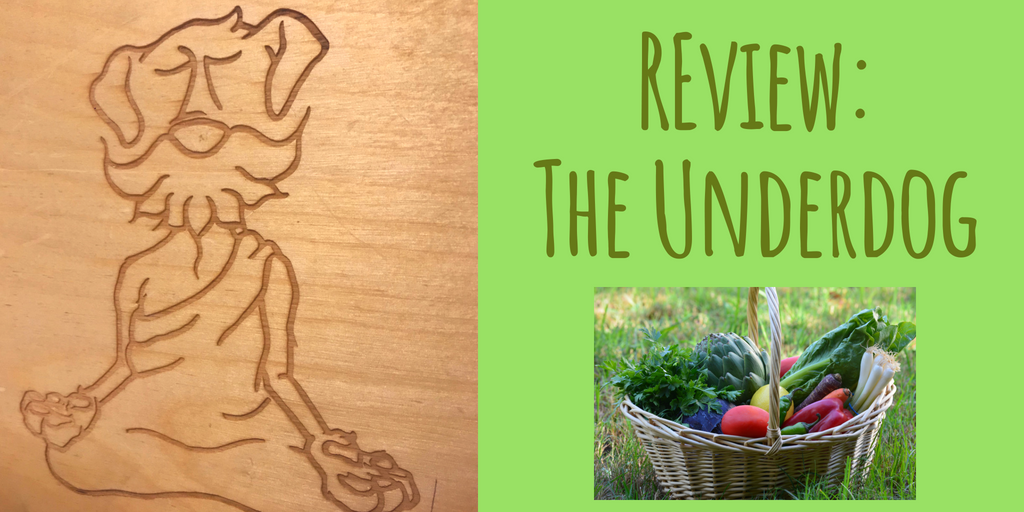 Note: As of March 2019, The Underdog has permanently closed. It was out of the blue. Not even a note to customers on the website or social media accounts, just basically dropping off the face of the Earth, social media wise. To me that’s unusual. I hope all is well with the owner and I wish him the best of luck in any future endeavours. I’m leaving up this review, for reference purposes.

If you’re in Limerick and want to find a vegan friendly restaurant, I’d recommend: Camile Thai (has a few good options), Milano (it’s Pizza Express, but different name), Cobblestone Joe’s (vegan pizza), Boojum Burritos, Wok This Way (Chinese delivery/takeaway), and Taikichi (Japanese, has quite a few vegan options). None of these places are exclusively vegetarian, but there’s some good stuff.

The other day, my husband and I went to The Underdog with our friend Leanne and had lunch there. One of the things I miss about Chicago is the selection of vegan food.

Even Evanston had better selection and it has a smaller population than Limerick. To be fair, Evanston is right next to Chicago. Okay that’s enough nostalgia and looking at my sort-of hometown with rose-tinted glasses.

For a long time, Limerick was missing a good vegan place. There was one vegetarian restaurant when I first came here, but it was not very good. Food wasn’t fresh (a lot of stuff tasted store-bought) and portions were ridiculously tiny. One time, I ordered a milkshake and it was basically a child’s portion, not cheap either. The service also left a lot to be desired.

Since this blog post isn’t all about throwing shade at restaurants, I’ll not name names. If you live in the area or even do a quick Google search, you’ll know what I mean, the place is closed anyway.

Last year, a better vegetarian restaurant called The Old Fire Station opened and then the last vegetarian place closed. I never had a bad experience there, but a lot of people I know have, complaining about food being poorly cooked, portions being too small for the price (I actually agree with this, I left the restaurant hungry on a couple of occasions), and food generally being disappointing at times. Seemed hit or miss among the vegetarians and vegans I know.

One of the owners of the restaurant left and decided to start his own restaurant, down the road, but this time, fully vegan. Alright, sounds interesting. When I first saw the concept and name, I laughed and said this sounds pretentious (my husband especially thought that), but we were proven wrong. I was always hoping for it to do well because we really need more vegan restaurant food for those lazy days. Supporting vegan restaurants and options shows that there is a demand.

The paint job on the outside is really interesting and unique, kind of has that raw, DIY look. My husband didn’t get it, but what’s most important about a restaurant is the food.

The interior is simple, black walls and simple wooden tables and chairs. In the back, you can clearly see the kitchen, which is interesting. There is a projector inside for movie nights, which they have on Wednesdays. They also have live music on Thursdays.

The menu is small, simple, and plant based. Every day there’s a different juice. This time, I saw a little something for everyone. For comfort food, there’s a vegan cheeseburger with potato wedges. There’s a trendy BBQ jackfruit wrap, which is what I ordered since it’s been ages since I’ve had jackfruit, last time was back in Byron Bay. For those who are more health-conscious, there are two salads. Of course, a vegan restaurant in Ireland wouldn’t be complete without a curry, and this time it’s a Thai massaman Curry.

Since we went on a weekday, it wasn’t busy at all. I think we were the only ones in the restaurant. Service was reasonable enough.

What I was really impressed with here were the portion sizes. Looking at their social media, I was expecting tiny portions for a moderately expensive price, but when I saw the food get here I was blown away. You really do get your money’s worth.

Went to The Underdog with @une.foret – amazing food, great portion sizes, I’m really impressed. Gonna have to talk about it on the blog. #vegan #jackfruit #limerick #whatveganseat #veganfood #veganfoodshare

As for the wrap, Jackfruit doesn’t taste much like meat, which is a good thing since I don’t like meat. It’s a good meat substitute, particularly pork (I don’t like pork at all, but I really like jackfruit). I really hope they keep the jackfruit wrap on the menu because I want to come back and eat it again.

We decided to get dessert. Sadly, they didn’t have any chocolate raspberry mousse ready, which was a bit disappointing, but it wasn’t busy at all so I really can’t expect as much stuff to be prepared. It seemed to be something that needed to be made fresh and it takes time, I respect that.

I got my second choice dessert, the cookie ice cream sandwich. It was good, but I clocked that ice cream as Alpro the second I tasted it. Alpro’s ice cream isn’t my favourite of the vegan ice creams, but it’s okay. The raspberry sauce on the cookie was really nice.

Overall, I’m happy with my experience here. I’d only come on special occasions because I gotta save money, but I’ll definitely come back at some point.