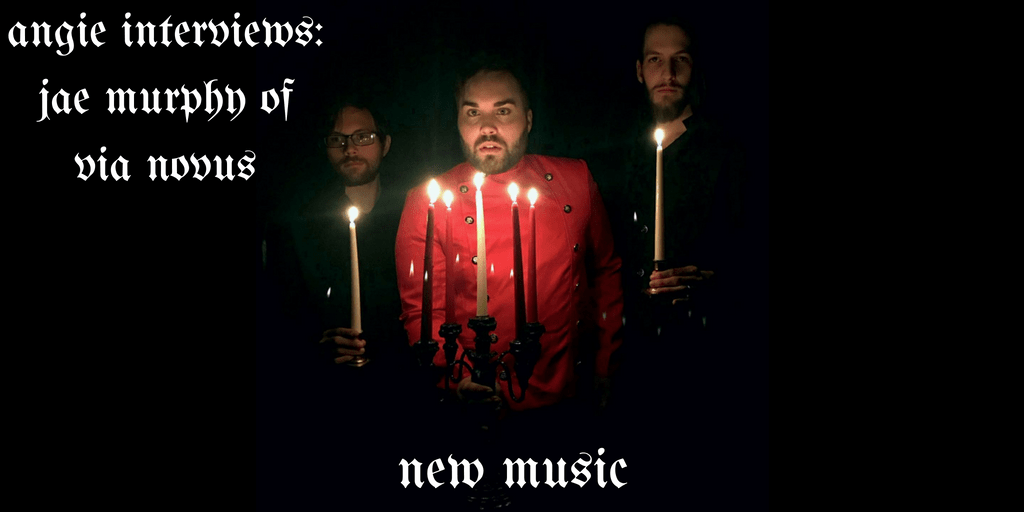 Via Novus were founded in Meridian, Mississippi in November 2016. Their sound is inspired by alternative rock and heavy metal. They released their debut EP, From Dusk to Dust in March of this year. Since the release of their EP, they have gotten attention abroad, being played on radio stations as far away as Canberra, Australia. They will be playing Midwestern Rockfest in Benton, Illinois on 1 September 2018.

I spoke to Jae Murphy, guitarist and bassist for the band about their beginnings, sound, journey, and their EP.

AM: How did you start?

JM: We originally formed in late 2016. The line-up then consisted of four former members of Shades Between. We started talking about doing music again and eventually got together to play our first show under the name “Via Novus.”

AM: What is the meaning of your band name?

JM: We were going around in circles for days trying to decide on a band name. I believe it was Clinton [vocals and keyboard player] who proposed “Via Novus”. It roughly translates from Latin to “a new path”.

We just liked the way it sounded, but at the time I don’t think we truly realised how much the meaning  would grow on us. This project really has been “a new path” for us not only as musicians but as friends – as a family.

AM: How did you get interested in music and gothic/Victorian fashion?

JM: Each of us individually could write more than anyone would care to read about how we got into music. However, the reason we continue to do it is the same for each of us. We love it. Creating and performing music with people who are like family to you is an incredible experience. It’s also about expression. Music is the outlet we most easily express ourselves through.

The same can be said about our Gothic/Victorian inspired visuals; it’s a form of expression that comes naturally to us. Part of the allure to that style comes from the exoticism it has. We find beauty in the gentle darkness of it. We’re also drawn to the more androgynous elements of the fashion as well; you can see a lot of that in some of our stage attire, and you’ll be seeing a lot more of it in the near future.

AM: Who were your biggest musical influences of the past and present?

JM: We come from diverse backgrounds, so our influences are spread out all over the place. Punk, classic rock, pop, r&b, jazz, metal, industrial, you name it.

However, our sound has been compared to that of Evanescence, old school Thirty Seconds To Mars, Breaking Benjamin, and My Chemical Romance and we all enjoy those bands as well.

AM: How has your sound changed and evolved since the beginning?

JM: Dramatically. Most of our followers have never heard the first originals we did as a band. When we first started this thing, we were experimenting with extended range guitars. Ultimately, we decided that wasn’t the direction we wanted to go. We do plan on revisiting at least one of those songs though.

Dusk To Dust really set the stage for our sound. Our upcoming single will be similar but much darker and backed with more orchestral/synth parts than anything else we’ve done.

That theme will also carry over into our next album if it’s well received. We also just got a new drummer, Jonathon, so far we’re really excited about what he’s bringing to the band, and we can’t wait to see how his presence influences our sound going forward.

AM: What are your goals for the future?

JM: Like most musicians, our biggest goal is to turn Via Novus into a full time career and make at least a modest living off of doing what we love. Other than that, we just want to get our content in front of as many people as possible, even if that means continuing to be broke most of the time.

We work hard and ask ourselves every day “What can we do today that will make this thing bigger than yesterday.” Part of that will include more content. We want to continue doing teaser videos and writing music, but we’re also planning on doing a full length music video, more behind-the-scenes type videos, we’re even thinking about launching a band blog to give an even more personal experience to our followers. We’ve got a lot on the agenda.

AM: How big of a metal following is there in Mississippi?

JM: Our metal scene died about 4 or 5 years ago. Most of the venues we played in our old band aren’t even open anymore. Don’t get me wrong, we still have a music scene, but it’s small and spread out.

That’s really just motivated us to work harder though. We travel for most of our shows and do a massive amount of networking via the internet. Not having a thriving local scene has forced us to branch out, so in a weird way, the lack of a local scene has actually helped us.

AM: How was recording the EP, Dusk to Dust?

From a songwriting standpoint though, it was smooth and natural. Each song just fell together like pieces of a puzzle. We connect as musicians on a level that I don’t believe happens often. We’re very proud of it, but the best is yet to come for sure.

AM: What inspired the EP and why is it called Dusk to Dust?

JM: We decided to go with this name because of the journey we took to write it. We dug deep into ourselves and found parts we had not explored before, each song unearthing new meaning and also taking us from our comfort zones to a whole new area.

This also was a symbol of a phoenix rising from the ashes (dust) and soaring into the new day. We rose from our past and let Via Novus soar.

AM: Any plans to release it on vinyl?

JM: Where we’re at in our journey so far, it just wouldn’t be a very wise investment to get vinyl copies of a five track EP made. That being said, we certainly do plan on releasing music on vinyl in the future. As far as what and when, it’s too soon to say.

AM: What advice do you have for musicians just starting out?

1. Hard times happen; push through them. It’s worth it.
2. On your down time, work. You don’t have to be playing a show or at a rehearsal to promote your band. Social media is your new best friend. Use it.
3. If you can’t afford to hire someone, do it yourself. Now is a really amazing time for DIY bands.
4. Above all, do it for the right reasons. No one goes into this for the money. Most of the money we have made has been reinvested back into the band. Why? Because we care more about growing and continuing our journey than making a paycheck. We do this because we’re passionate about music and the memories we make from doing it.
5. Never compare yourself to someone else. Success is arbitrary, especially in this field. Set your own goals, define your own success, and make it happen!