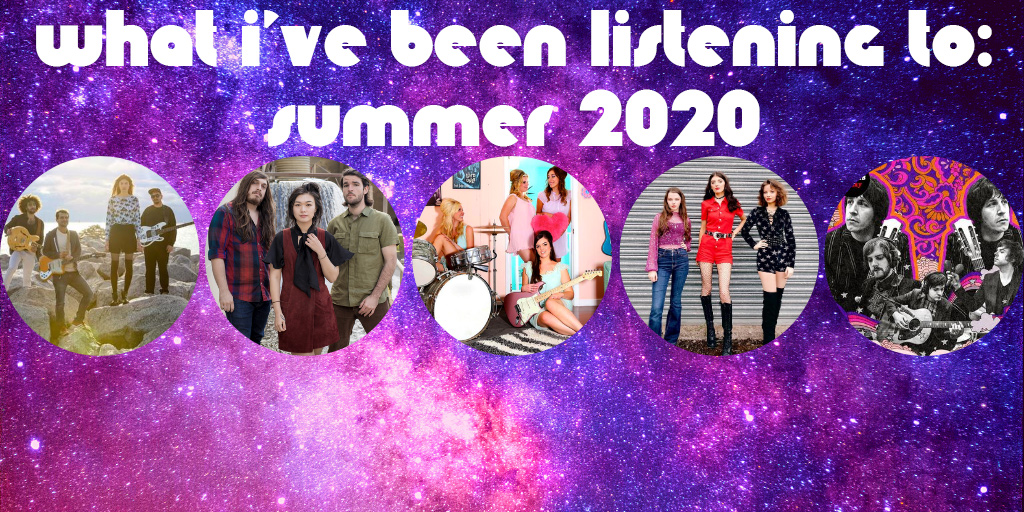 Well, this year didn’t exactly have a summer. Like most of you, I spent it cooped up my house, but I guess it isn’t all bad because I’ve had the privilege to speak to a bunch of musicians and find out about new music. One door closes, but another door opens, I suppose.

Quarterly, I do a roundup of new music releases from each season. For this one, I will be talking about releases from this summer, so music from June to August. In this series, I make sure to emphasise classic rock inspired music from not as well known musicians. There’s enough out there about mainstream artists and mainstream releases, what I aim to do is give you a breath of fresh air and show that rock isn’t dead.

If you want to read more about what new music I’ve been enjoying, keep on reading!

Ex Norwegian are a garage/prog/power pop band from Miami Beach formed in 2008. I found out about them from Instagram and the album artwork by Dawn Aquarius caught my eye. I’m such a huge fan of her colourful artwork and I knew I had to give their music a listen. It’s gotten great reviews in RnR and Shindig!

The band didn’t just give us one album, but two sister albums this summer! Hue Spotting is their original album, but if you’re in a mood for obscure vintage covers, check out Spotting Hues. It’s a buffet of psychedelia and you can find chill songs, energetic songs. No matter what mood you’re in, you can find something for you and you might feel inspired to branch out more into new music and old music.

My favourite tracks are “Fear Backwards”, “Something 2020”, “Your Mind Is Mine”, and “Not Underground” from Hue Spotting and “Hallo to Me”, “Buffalo Billycan”, “The Cry of Eugene”, “Baby Stay For Tonight”, “Girl From New York”, and “Lady of the North” from Spotting Hues.

Found out about this band through Reddit and I’m so glad I stumbled upon their music. Great for fans of Temples, Tame Impala, Dungen, Pond, Polaroid Buffalo Club, and Melody’s Echo Chamber. They were formed in 2007 and the main person behind it is Lionel Williams – who is the grandson of cinematic composer John Williams, son of duper and producer Mark Towner Williams and classical pianist Leah Williams.

A heavenly, beautiful album. Just what I needed to calm down my anxiety in these trying times. Perfect from start to finish. It’s rare that I find a perfect album nowadays in this singles and instant gratification era, but here it is! If I had to pick highlights I’d say they’re “Mithras”, “Never Tell The World”, “Machu Picchu”, “Heaven”, “Magicland”, and “Earth Observatory”. I loved it so much I even went back and listened to the last album, Opal, also worth a listen.

Covet are a math rock (a type of progressive rock) band from California. They were formed in 2014 by Yvette Young, a multi-instrumentalist and singer. I fell in love with their music when I found the song “Shibuya” on one of those days where I was bored and browsing YouTube for some good music to listen to. If you like Rush, King Crimson, Yes, or just instrumental rock and weird time signatures – you’ll love Covet.

Once again, another perfect album and I don’t just say that about any album. Instrumentals are my favourite chill music because there’s no words and you can imagine the meaning and take a trip wherever you want. Highlights from this album are “atreyu”, “parachute”, “pirouette”, “parrot”, and the one song with vocals “farewell”. Yvette Young has a beautiful voice and it’s great to hear it on this album.

LA Witch are an all girl band that take inspiration from classic rock. The lineup are Sade Sanchez on guitar/vocals, Irita Pai on bass, and Ellie English on drums.

If you’re into harder, badass, more gothic/witchy garage/psychedelic rock and you like musicians like Tess Parks, LA Witch may be the band for you. In this feature, we make sure to share a variety of rock sounds. Put on your leather (or pleather) jacket, your favourite sunglasses, your favourite boots and walk down the street confidently to this album. “Dark Horse” reminds me of something you might hear in a Tarantino movie.

The Surfrajettes are an all girl instrumental/surf rock band from Canada. Their latest release makes you feel like you’re at a beach sometime in the early 60s. That’s the very place I wish I was right now. If you like musicians like Susan Surftone and Dick Dale, you’ll love the Surfrajettes! My big wish right now is a whole Surfrajettes album!

I found out about this trio from Northern Ireland from Instagram and I decided to give their music a listen and really loved what I heard and was hoping they would have a release this year to talk about for my blog. They’ve been praised by Hot Press, The Irish News, and Metal Planet Music. That wish came true! I’d love to see them live and I hope when it’s safe to go out, I can see them live. If you like Fleetwood Mac, Heart, and Led Zeppelin, you’ll love Dea Matrona. The band are made up of sisters Mollie and Mamie McGinn and their friend Orláith Forsythe.

This Chicago based psychedelic rock musician released a new track and it’s sitar driven and you know how much I love sitar – just makes a song sound dreamy and out of this world – sends chills down my spine in a good way. I interviewed him back in 2018 when he was making music as The Count, click here to check out that interview!

Want an upbeat, infectious, fun glam rock summer track, stream Micky James’ “Kings”. Can’t get enough of it! If you like The Strokes, The Struts, and David Bowie, you might like this song.

Deanna is an indie/folk singer-songwriter from Toronto who I went to university with. Her music is inspired by Elliott Smith and Julie Jacklin. She’s written over 70 songs and has a lot of experience playing at open mic nights and wanted to release music for an EP. This summer, she released her acoustic debut single, “Electric Blue”. She has a really chill and unique voice and reminds me of music from the Life is Strange soundtrack and a bit of the Velvet Underground for some reason.

Fire In Her Eyes are an all girl psychedelic folk trio from London made up of sisters Daniella and Natasha with their friend, Gabrielle. Check out their latest release, “People of the Sun”, beautiful harmonies and guitar – everything I love about the magical time in music that was the 60s. They’ve gotten praise from Planet Rock, Radio X, and BBC Radio 1, so they’re definitely a band to watch!

The Moons are an indie rock band from Northampton formed in 2008. Guitarist/singer/songwriter Andy Crofts works with Paul Weller and Paul Weller has worked with The Moons and if The Modfather approves, you know it’s good! If you’re into psychedelic rock, garage rock, and music popular in the mod subculture – you’ll really like The Moons.

Their first new album in a little over half a decade, Pocket Melodies, is coming out in October and it’s something I’m definitely looking forward to! Fans have been waiting a while for new music from them and here it is! “Riding Man” is a song I’ve been playing a lot lately and it’s really cheerful. “Sunday Love In” has more of a Britpop sound to it with some strings.

Read my interview with Andy Crofts of The Moons here!

In the mood for 50s rockabilly with a bit of a 70s flair? Look no further than Jeremy & The Harlequins. The A-side “Let’s Ride” is an upbeat rock and roll song about freedom and travelling, something that people can only wish for now. It stands out a lot with its retro vibes and makes me think of road trips and diners. “Fury” is a more Americana/country rock inspired song.

Silver Seeds are a band from Dublin. Their latest song, “Shangri-La” is a retro, power pop/Britpop sounding song. It’s a nostalgic one about getting away from it all and living simpler. If you like The Raspberries, Badfinger, Big Star, Blur, and Oasis, you might like this song. If you want to hear more for them, keep your eyes open for their debut album, Hope.

The Cat Magic are an alternative band from Bristol. If you like old school Tame Impala and Sun Structures era Temples, you might like their latest single, “Just The Way”. It’s mesmerising and hypnotic and has a little bit of baroque pop, Zombies sort of influences. Definitely a band I’m going to keep my eyes on. If a kaleidoscope were a song, this might be it!

A topical song made in isolation about institutionalised racism in the US, this song was inspired by George Floyd. This 70s hard rock inspired song makes a statement about the current state of things in the US. I love the guitars in this song. Brings you right back to the golden era of protest songs – the 60s and 70s.

I mainly talk about classic rock on this blog, but I like other genres like disco. This song combines Indian music with Giorgio Moroder Italo Disco. I love hearing east meets west and this is India meets Italy on the dancefloor – a combination I’ve never heard before but I love it. Kaye is a music project by Kevin Guoh, an underground electronic musician from Singapore. Thank you YouTube recommendations!

Shoutout to my friend Patrick for supporting the blog!

I am also an affiliate of MusoSoup*, a platform for musicians to efficiently share their music with thousands of bloggers, radio stations, and curators for coverage for a very affordable price. If you’re a blogger, you can sign up for free by contacting them. If you’re a musician, you can sign up and share your music with all the bloggers and content creators signed up on the website. If you sign up as a musician using my referral link, I get a commission, which helps keep this blog running and helps you get more publicity for your music.

*This is an affiliate link that you can use at no extra cost to you. I get $5 for every person who downloads the browser through my link. Downloading Brave (which is free) using my link is a nice gesture to support the blog at no out of pocket cost to you, but it’s not obligatory. For the MusoSoup affiliate link, I get 50% of the sign up fee for musicians. The cost is no extra if you use my affiliate link.