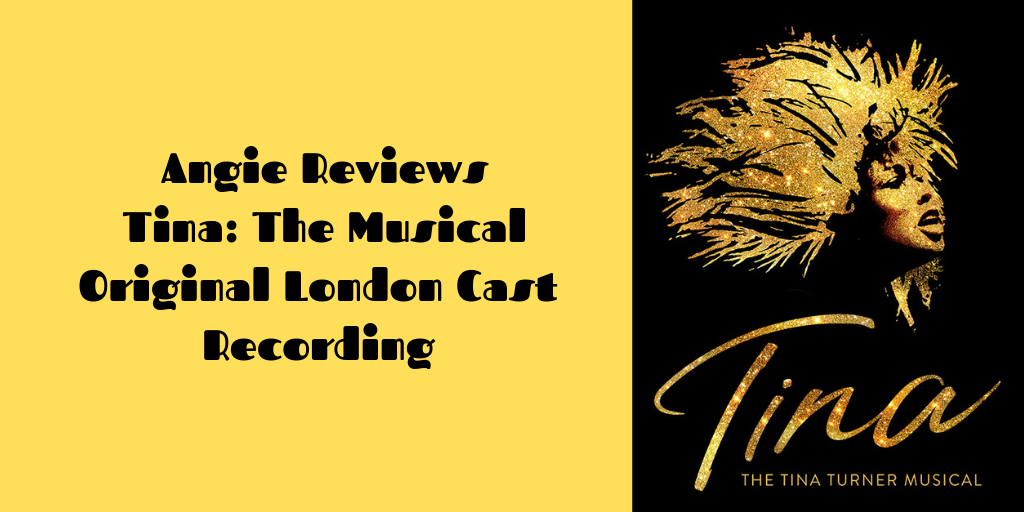 I’ve always wanted to go to a musical in either London or New York, but sadly, I never had the chance to because I don’t have the money. A great way to enjoy musicals is to listen to recordings of them.

I was generously sent a review copy of the Original London Cast Recording of Tina: The Tina Turner Musical to review. If you want to know my thoughts, keep on reading.

The album will be available in stores for $18.98 and online for $13.99. It is distributed by Ghostlight Records, an imprint of Sh-K-Boom Records, who have released other musical recordings like In The Heights, The Book of Mormon, and Beautiful: The Carole King Musical. All of which have won Grammys for Best Musical Theatre Album.

First, a little background on the musical. Tina tells the story of Tina Turner, born Anna Mae Bullock from her humble beginnings in Nutbush, Tennessee to her stormy relationship with Ike Turner in the 60s to her comeback in the 80s with songs like “Private Dancer” and “What’s Love Got To Do With It.”

The musical made its West End debut at the Aldwych Theatre in April 2018. It has generally received praise from the press as an excellent bio-musical and Warren’s performance was excellent. It was nominated for three Olivier Awards, for Best New Musical, Best Actress in a Musical, and Best Actor in a Musical. The London cast stars Adrienne Warren as Tina Turner and Kobna Holdbrook-Smith as Ike Turner.

This month, the show opened in Hamburg, Germany at the Stage Operettenhaus and later this year, the show will open on Broadway in the fall with Adrienne Warren as the star. If you’re located Stateside and can’t make it to London, you might want to consider seeing this musical in New York.

The album has 24 songs on it, opening with Nutbush City Limits, telling the story of Tina Turner in her birthplace and her beginnings singing in church. You’ll be taken to church with this version!

The second song, “Don’t Turn Around” is about her going on her own making her way to St Louis, where she met Ike Turner.

In “The Hunter”, Ike Turner is introduced to the album.

In “I Don’t Want To Fight”, Tina finally leaves Ike and goes on her own. This song will make you feel emotional.

The album finishes strongly with a reprise medley of “Nutbush City Limits” and “Proud Mary”.

Not all of the songs are songs by Tina Turner. The Al Green hit, “Let’s Stay Together” is on the album. While it’s playing in the part of the musical that takes place in the 60s and the song is from the 70s, it’s still a nice addition to the musical.

Like a lot of musicals, the songs aren’t in chronological order, but the point of a musical is to entertain and tell a story. It’s not a documentary.

The highlights of the album for me are “Shake a Tailfeather”, famously performed by Ike & Tina Turner with the Ikettes on backing vocals; “It’s Gonna Work Out Fine”, which sadly tells the story of Ike mistreating Tina. It’s a hard part of the story to tell because of how sensitive the subject, but I think the musical did it well; “A Fool in Love”, one of the first R&B/pop crossover hits; “I Want to Take You Higher”, introduced as a television performance – fun fact: Ike & Tina Turner’s version of the Sly and the Family Stone song charted higher than the original on the pop charts; “River Deep – Mountain High” – my favourite ever Tina Turner song, honestly surprised that this song flopped in America; “Proud Mary”, a CCR cover – love how it starts slow and then speeds up into energetic rock and roll; “Tonight”, a song David Bowie and Tina Turner sang together in 1984; and her comeback single “What’s Love Got To Do With It”.

The story of Tina Turner is one that talks about her strength, resilience, and persevering through tough times. Overall, I really enjoyed this musical recording. If you’re a fan of her music, I recommend getting this recording of the West End musical or seeing it live.

Loved this post and want to see more great posts like this and show your appreciation for The Diversity of Classic Rock? Chip in some money on Patreon (monthly donation) or Ko-Fi (one-time donation). Or buy my merch or my photography prints on RedBubble. Or donate your writing or art talents to my blog, contact me here if you’re interested in collaborating. All of this is totally optional, but extremely helpful.