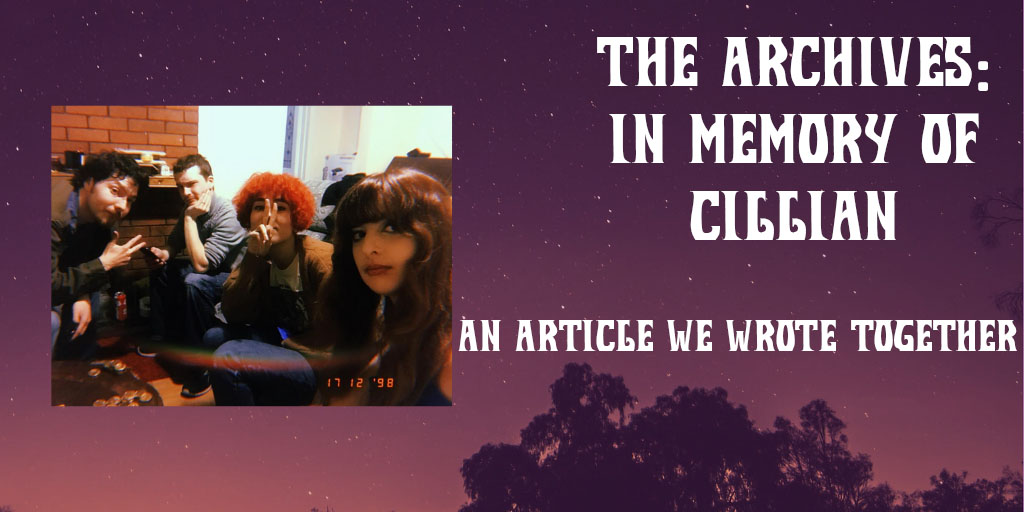 A year ago, I got a text from a friend that Cillian passed away. Cillian was a classmate of mine in the Journalism MA and was the classmate I was closest to.

I only knew him for a year and a half, but in that time, he made such an impact and inspired me. The minute he walked in in his vintage/cowboy inspired outfits (I think we called him the Celtic Cowboy), I knew this is the coolest guy in class.

He was the kind of person who was really memorable. Great sense of humour, very smart, and loved politics, baseball, reading, theatre, and music. I could tell all sorts of stories, but it’s still hard to recount them without crying.

He’d always tell me to go for my goal of writing about music and travelling the world. He always had faith in me as a classic rock music writer. My blog has grown a lot and I think my writing has improved and I’ve found the style and voice that works best for me. I’m finally getting out of my shell and talking to other musicians. I think he’d be proud.

Anyway, here’s an article that Cillian and I wrote together (original can be found here) about his friend Dora, who is a singer-songwriter. She premiered her music video in the autumn of 2016 and we interviewed her. I hope you enjoy it!

Limerick singer-songwriter Dora Gola, premiered her first music video for her song “I’m Not,” at the Richard Harris International Film Festival on Sunday. Speaking to the Limerick Voice she said: “The video itself is telling a story of a dissonance of two worlds, I suppose. One is black and white, it’s reality, and the other one is the world of dreams, and of desires”

Gola said the video is very much led by emotion. “That’s why I wanted the video to be very intimate, and very me.”

The music video took a month to complete, and also stars Zeb Moore. “He said that I should launch it at the Richard Harris Festival, which he’s involved with,” Said Gola. “Now I’m here, and I can’t believe it happened!”

Gola said her biggest dream is to get her music onto films, and onto the big screen. “The best thing for me is watching a movie, and when the cast come up, and you hear the song come on, that’s what I want.” Gola said the great thing about the Richard Harris film festival is that it’s great for networking. “It gives you a chance to meet people, and tell them, ‘this is what I want to do’.

Gola said that doing the music video was probably the biggest chance she took. “I had to expose myself and get used to seeing myself as well; I could never do that. It took me years to get used to my voice. Now I’m fine with it.”

Gola has found herself on a very diverse musical journey that’s taken her all over the world, and through a variety of musical stylings. On this subject, she said “There’s a singer songwriter named Alexz Johnson, from Canada, and she’s always been my main inspiration. And funnily enough I can see a lot of her stuff in my stuff. But every day I’m listening to different things.”

Gola said her music genre varies greatly, from pop, to metal to gospel. “Every track I make is very different, and the music journey I’ve been through has been very different because of that,” said Gola. “Collaborating with different people, different bands, and different styles. Everything from traditional Irish to Jazz, recently hip hop, and now I’m incorporating house and techno into some of my recordings.”

The video for Dora Gola’s video ‘I’m not’ is available to watch from YouTube here: